To date, inheritance of a mutant BRCA1 or BRCA2 gene is the best-established indicator of an increased risk of developing breast cancer. Sequence analysis of these genes is being used to identify BRCA1/2 mutation carriers, though these efforts are hampered by the high frequency of variants of unknown clinical significance (VUSs). Functional evaluation of such variants has been restricted due to lack of a physiologically relevant assay. In this study we developed a functional assay using mouse ES cells to study variants of BRCA1. We introduced BAC clones with human wild-type BRCA1 or variants into Brca1-null ES cells and confirmed that only wild-type and a known neutral variant rescued cell lethality. The same neutral variant was also able to rescue embryogenesis in Brca1-null mice. A test of several BRCT domain mutants revealed all to be deleterious, including a VUS. Furthermore, we used this assay to determine the effects of BRCA1 variants on cell cycle regulation, differentiation, and genomic stability. Importantly, we discovered that ES cells rescued by S1497A BRCA1 exhibited significant hypersensitivity after γ-irradiation. Our results demonstrate that this ES cell–based assay is a powerful and reliable method for analyzing the functional impact of BRCA1 variants, which we believe could be used to determine which patients may require preventative treatments. 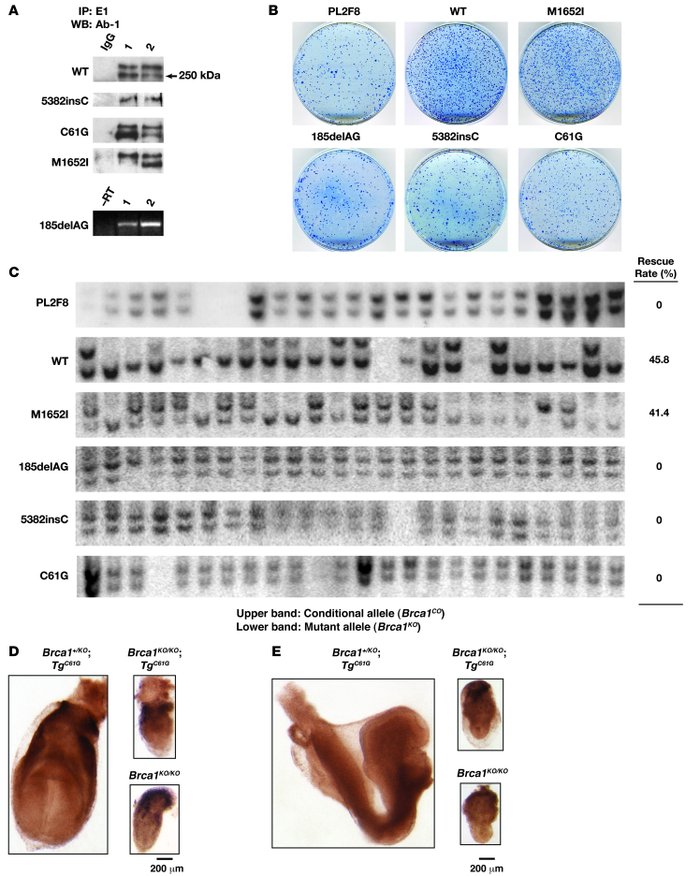 () Expression analysis of WT BRCA1, M1652I, 2 founder mutations (185delAG and 5382insC), and C61G variants using human BRCA1 BAC in mouse ES cell (2 clones for each). Protein expression was confirmed by immunoprecipitation using a human BRCA1-specific antibody (E1) followed by Western blot analysis using a commercial BRCA1-specific antibody (Ab-1), which gives 2 bands of about 250 kDa (). Expression of 185delAG was detected by RT-PCR (lower panel). –RT, no RT, negative control. () Methylene blue staining of HAT-resistant ES cell colonies with no BAC (PL2F8), WT M1652I, 185delAG, 5382insC, and C61G BRCA1 BAC transgene. () Genotyping of HAT-resistant colonies by Southern blot analysis. The upper band representing the conditional allele was deleted in 45.8% of the cells with WT or 41.4% with M1652I BRCA1. In contrast, none of the colonies from PL2F8 cells or those expressing 185delAG, 5382insC, and C61G BRCA1 variants showed loss of the conditional allele. () Whole mount of a embryo at E7.5 showing retarded development, similar to the embryo. control embryo shows normal embryonic development at E7.5. () Whole mount of a embryo at E8.5 shows severe developmental defects compared with a embryo (left).