Arteriovenous malformations (AVMs) are vascular anomalies where arteries and veins are directly connected through a complex, tangled web of abnormal arteries and veins instead of a normal capillary network. AVMs in the brain, lung, and visceral organs, including the liver and gastrointestinal tract, result in considerable morbidity and mortality. AVMs are the underlying cause of three major clinical symptoms of a genetic vascular dysplasia termed hereditary hemorrhagic telangiectasia (HHT), which is characterized by recurrent nosebleeds, mucocutaneous telangiectases, and visceral AVMs and caused by mutations in one of several genes, including activin receptor–like kinase 1 (ALK1). It remains unknown why and how selective blood vessels form AVMs, and there have been technical limitations to observing the initial stages of AVM formation. Here we present in vivo evidence that physiological or environmental factors such as wounds in addition to the genetic ablation are required for Alk1-deficient vessels to develop to AVMs in adult mice. Using the dorsal skinfold window chamber system, we have demonstrated for what we believe to be the first time the entire course of AVM formation in subdermal blood vessels by using intravital bright-field images, hyperspectral imaging, fluorescence recordings of direct arterial flow through the AV shunts, and vascular casting techniques. We believe our data provide novel insights into the pathogenetic mechanisms of HHT and potential therapeutic approaches. 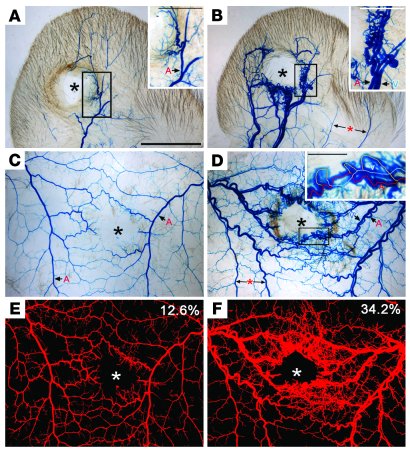 Vascular patterns shown by latex dye injected into the left heart of control (; , , and ) and mutant (; , , and ) mice bearing wounds in the ear ( and ) or dorsal skin (–), 8 days after TM injection. The images were taken after clearing in organic solvents. The center of the wound is indicated by an asterisk. Note that only mutant mice developed AV shunts, shown by the presence of latex dye in both arteries and veins. AV shunting and abnormal vascular morphologies were apparent only in the wound areas. Blood vessels away from the wound, indicated by arrows with asterisks ( and ), showed normal appearance. Inset in shows a magnified view of AV fistulas formed in the rim area of the mutant wound. Arteries and veins are marked by red and light blue lines, respectively, and the AV anastomoses by yellow lines. ( and ) The images in and were processed to quantify the area of blood vessels containing the latex dye in the given area. All figure panels are at the same magnification. Scale bars: 5 mm (); 2 mm (insets in and ); 1 mm (inset in ).