Autism’s false prophets: Bad science, risky medicine, and the search for a cure 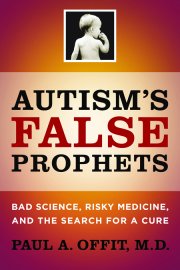 Autism has received tremendous attention in the lay press because of its high prevalence and unclear etiology, specifically regarding whether vaccines or vaccine additives are implicated in the disorder. Unfortunately, much of the information disseminated by the lay press is from persons with little, if any, medical or scientific background — or, worse yet, from scientists that have engaged in scientific misconduct. In Paul A. Offit’s Autism’s false prophets, the reader is quickly absorbed by the story of the perceived relationship between vaccines and autism, but also outraged by the egregious nature of individuals such as Andrew Wakefield, who in 1998 allegedly falsified lab data from 8 autistic patients to implicate the measles-mumps-rubella (MMR) vaccine in autism. This interpretation of the data, published in The Lancet (1), was ultimately retracted by 10 of the study’s 13 authors in 2004 (2).

Offit, a pediatric infectious disease specialist, pioneered development of a licensed rotavirus vaccine and is currently director of the Vaccine Education Center at the Children’s Hospital of Philadelphia (CHOP). He cogently tells the history of autism, and the varied US groups that have offered an array of alternative therapies for the disease, including gluten- and casein-free diets and vitamin supplements. Offit acknowledges that many parents have tried these “treatments” (including the author of this review; I am a father of a 13-year-old with autism), and he appropriately acknowledges that although these interventions may have little benefit, they also have minimal harm. However, after publication of the 1998 Lancet paper by Wakefield et al. (1), this risk/benefit relationship changed. Some parents stopped vaccinating their children. This resulted in clusters of measles outbreaks, some resulting in fatalities. The Centers for Disease Control and Prevention as well as independent groups in Canada and Europe analyzed large cohorts of patients and clearly demonstrated that MMR was safe and statistically not associated with autism. My own son clearly showed abnormal social and motor behavior as early as 6–8 months of age, 9 months before his MMR vaccination. In fact, we now know that with more sophisticated screening tools, most children with autism can be diagnosed by 12 months of age.

With the MMR theory successfully debunked, Offit goes on to discuss another theory: that the mercury-containing vaccine preservative thimerosal causes autism. He recounts prior episodes of large-scale mercury poisoning (e.g., Minamata Bay, Japan), highlighting that the resultant neurological syndrome is distinct from autism. Moreover, since 2001, all routinely recommended infant vaccines in the US have been thimerosal free, yet autism prevalence remains the same or continues to increase. The text is interlaced with outrageous stories of personal injury attorneys refusing to understand the power of epidemiological studies and continuing to fuel the vaccine/autism fire. In fact, some desperate parents have resorted to chelation to rid their autistic child of toxic substances, which has already resulted in one death due to hypocalcemia.

Autism is a genetic disease, and Offit highlights the need for more research in order to advance therapeutics. It is here that the book falls a bit short. Autism affects 1 in 150 children, but despite this high prevalence, Offit does not deal with the real culprit in the explosion in prevalence of unproven or even dangerous “therapies” for this disease — too often, parents of children with autism are often left to fend for themselves, sourcing information from the Internet. Offit draws comparisons between children with autism and those with other genetic diseases, such as cystic fibrosis (CF) and sickle cell anemia. Patients with the latter two illnesses often receive care in multidisciplinary care centers and are tracked by national patient registries, which have clearly played a role in improving disease outcome (3). The medical community serving autism patients desperately needs infrastructure, as the lack of infrastructure has contributed in large part to the exploding phenomenon of false prophets. As pediatricians, we must demand change.

Autism Speaks, the nation’s largest autism advocacy organization, currently funds perhaps the most important infrastructure in the US for children with autism — the Autism Treatment Network, the goal of which is to serve as a medical health care delivery model for children with autism. This initiative currently funds only 15 sites around the country (in comparison, the CF Foundation funds over 100 CF care centers), but it is already making progress in enrolling autistic children and their parents in autism registries and research studies. It will take greater resources, better reimbursement of behavioral health care services by insurance companies, and more appropriate training of pediatricians in developmental pediatrics to bring about positive change. However, it can be done.