Tumor growth is accompanied by tissue hypoxia, but does this reduced oxygen availability promote further tumor expansion, resulting in a vicious cycle? In this issue of the JCI, Galluzzo et al. report that increasing oxygen tension in tumor cells by ectopically expressing the oxygen-binding hemoprotein myoglobin indeed affects tumorigenesis (see the related article beginning on page 865). Tumors derived from cells transfected with myoglobin grew more slowly, were less hypoxic, and were less metastatic. These results will spur further mechanistic inquiry into the role of hypoxia in tumor expansion.

Possible interactions of Mb within the cancer cell and the metabolic and functional consequences on tumor growth and spread. 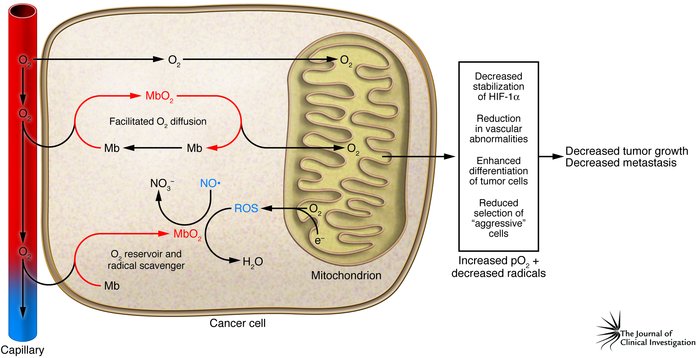 Tumor progression is well known to be associated with hypoxia, which itself gives rise to enhanced stabilization of the master regulator HIF-1α and also to an augmented release of ROS, caused by an increased leakage of the mitochondrial electron transport chain. Due to its high O2 affinity, Mb may serve as an O2 store and facilitate O2 transport from capillaries to mitochondria even under conditions of limited O2 availability. As a consequence, the ectopic expression of Mb within cancer cells carried out by Galluzzo et al. () leads to an improved O2 supply to the tumor, as reflected by the enhanced tissue O2 partial pressure (pO2) reported in this study. Additionally, Mb can reduce oxidative and nitrosative stress in cancer cells by detoxification of ROS to water and of NO radicals (NO•) to nitrate (NO3–), respectively. Together, these result in an environment of enhanced aerobic mitochondrial respiration and reduced levels of free radicals, favoring efficient degradation of HIF-1α, a key player in the progression of tumor metabolism to a more aggressive phenotype (). As demonstrated by Galluzzo et al. (), the metabolic environment created by the presence of Mb in cancer cells furthermore implicates cell differentiation, a reduction in vascular abnormalities, and a reduced selection of aggressive cells, which, in turn, retards tumor growth and metastatic spread.