America’s food: What you don’t know about what you eat

Find articles by Ellis, B. in: JCI | PubMed | Google Scholar 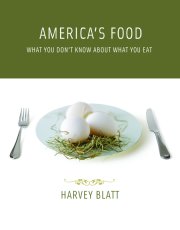 America’s food explores a food supply system whose efficiency and productivity is unparalleled in human history. Modern industrial farming is not unique to the USA, but it has been refined and deployed here on a scale unmatched anywhere else. As one consequence to this, Americans are now able to spend a smaller fraction of their disposable income on their daily food than anyone on the planet, but as Harvey Blatt makes clear, there are many other consequences to consider, most of them undesirable. The catalogue of deleterious effects includes social dislocations (loss of family farms), economy-distorting government subsidies for farmers, and the widening gulf between urban lifestyles and the realities of our food production practices. Most consumers are physically far removed from the industrial farms, feed lots, and processing plants responsible for restocking supermarket shelves. Our food supply system is therefore reliant upon a vast, fossil fuel–supported transportation network that is a substantial contributor to factors that effect climate change. At the same time, the lack of experiential connection within the general public to the origins of our daily meals has created a knowledge vacuum that can frustrate both nutritionists and policy makers. As Blatt emphasizes in the chapter “Eating poorly and too much,” what you don’t know really can kill you! Between the social impacts and the continuing terrestrial and aquatic environmental degradation, it is clear that both our society and our biological home are paying a steep price for our enthusiasm for cheap food combined with maximized profits.

Blatt generally does a commendable job of organizing and linking the many topics he covers in his book. He employs an engaging writing style, although it is sometimes compromised by inclusion of relentless waves of citations and specific data. This strategy is presumably intended to create a more objective framework for his analysis. However, the data presented are often rather uneven in their usefulness; embedding strings of specific numbers in the text also interferes with the impact of an otherwise compelling argument. He is also prone to frequent brief excursions into interesting but tangential stories. The result is a curious amalgam of academic textbook and informed editorial. Part of the difficulty may be that Blatt, a geologist by training, finds himself immersed in topics that are far removed from his professional background. He is thus largely reliant on secondary sources for his information.

Given my experience with genetically engineered crops and the associated controversy, I was interested to see how he handled this value-laden topic. On balance, his treatment of genetic engineering technology is factual and presented at a level that most lay readers will be able to follow. He strives to examine both the positive and negative aspects of the commercial deployment of this technology in our food supply system, although it is clear that he would prefer that genetically engineered foods not be on the menu. He effectively counters the agricultural biotechnology industry’s claims that genetic engineering technology will be essential to global efforts to deal with food scarcity and malnutrition but is less convincing when arguing that use of genetically engineered crops may ultimately be a losing proposition economically. In my experience, farmers are very good at reading the economic landscape, so it is hard to argue with the statistics showing increasing numbers of growers switching to herbicide-tolerant and pest-resistant crops. Germane to this topic and others covered in his book is our continued failure to recognize and deal with externalities of our food supply system. Our extraordinary productivity is too often based on depletion of soil and water resources, but the resulting future shortfalls are not being meaningfully factored into today’s market. We have also become accustomed to purchasing all year round products that used to be seasonal or exotic. We enjoy this bounty thanks to cheap labor, farmscape industrialization, and subsidized transportation platforms that bring us Chilean grapes, Australian apples, or papayas from Thailand. The ability of our food supply system to ignore the economic, social, and environmental damage that accompanies currently profitable (and thus popular) management practices and policies leaves it fundamentally unsustainable in the long term.

The book ends with five exhortations that describe what we can and should do. The spirit of these, and of the book as a whole, is probably best captured in his final appeal: “We as citizens need to inform our elected officials that we want major changes to be made in the agricultural sector.” As the USA moves into its next political cycle, the opportunity may exist for the country to steer a new course that recognizes and acts upon the need to place limits on our greed. For such a journey, America’s food will provide a very useful guidebook.