Gene silencing below the immune radar

Gene silencing below the immune radar

In vertebrates, the detection of viral nucleic acids is the first step toward innate and subsequent adaptive antiviral immune responses. A sophisticated, protein receptor–based sensor system has evolved to recognize viral nucleic acids and to trigger a variety of antiviral defense mechanisms. The more we learn about this elaborate sensor system, the more it becomes evident how difficult it is to introduce exogenous nucleic acids such as siRNA into cells without triggering antiviral immunoreceptors. In this issue of the JCI, Judge and colleagues provide evidence that siRNA can be designed and delivered in a way that allows specific and successful silencing of target genes in tumor cells in vivo, leading to tumor cell death and prolonged survival of tumor-bearing mice in the absence of immune activation (see the related article beginning on page 661). This study represents a major technological advance, setting new standards for well-controlled siRNA applications in vivo, and has the potential to guide clinical development toward siRNA therapeutics with well-defined and selective gene-silencing activities. 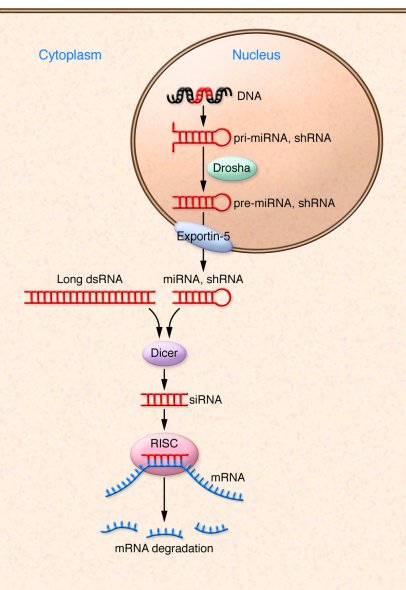 Long, viral dsRNA in the cytoplasm is cleaved to short, viral dsRNA (siRNA) by Dicer. MicroRNA (miRNA), a class of noncoding RNA molecules involved in gene regulation, is generated by Drosha-mediated cleavage from pri-miRNA transcribed in the nucleus, exported by Exportin-5 to the cytoplasm, and then cleaved by Dicer, resulting in siRNA. Similarly to physiological pri-miRNA, shRNA introduced to cells via gene transfer enters the same pathway (Drosha, Dicer), resulting in the release of the corresponding siRNA. siRNA produced by both pathways binds to RNA-induced silencing complex (RISC), and the sense strand is released from the RISC complex. Complementary binding of the antisense strand to target sequences guides RISC to cleave the target sequence (resulting in mRNA degradation) or, in the absence of full complementarity to the target sequence, inhibits its translation.