Poison pills: The untold story of the Vioxx drug scandal 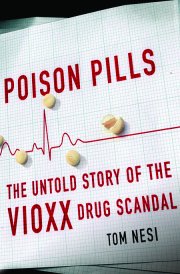 Mention the nonsteroidal antiinflammatory drug (NSAID) Vioxx and you are sure to elicit an emotional response from most scientists, clinicians, regulators, and patients. Some consider the voluntary removal of Vioxx from the market in September 2004 by its manufacturer, Merck, after studies revealed that it was linked to an increase in dangerous cardiovascular events such as strokes and heart attack, a huge loss of a valuable drug. Others consider the removal of this COX inhibitor to be the final step in a drug regulatory debacle. And still others consider the removal of Vioxx evidence of a pharmaceutical industry gone mad, where profits and marketing hype rule the day. Each of these points of view may have some merit and are the topic of Tom Nesi’s book Poison pills: the untold story of the Vioxx drug scandal.

While much of the Vioxx story has been laid bare in the lay press, Tom Nesi details a string of internal Merck communications that are meant to erode any remaining confidence one might have had in the pharmaceutical industry. Nesi, a former director of public affairs at Bristol-Myers Squibb, worked with attorneys representing plaintiffs in at least one of the many Vioxx court cases. In this role, he had access to internal communications from executives at Merck. Nesi attempts to piece together the scientific, marketing, and internal politics surrounding Vioxx, to suggest that the pill had little benefit, substantial toxicity, and was the product of a marketing machine rather than a rigorous scientific research and development process.

As a former publicist, Nesi’s focus is on Merck’s communication efforts surrounding Vioxx. He describes their tremendous efforts on the pre-launch communications as well as much of their efforts to control the message surrounding the drug’s potential benefits and harms. The company’s focus on the marketing of the drug meant that science and safety often took a back seat. After publication of the VIGOR (Vioxx Gastrointestinal Outcomes Research) study and the revelation of a 4- to 5-fold increased risk of cardiovascular events in subjects using Vioxx compared with those using the NSAID naproxen, the FDA asked Merck whether the Data Safety Monitoring Board (DSMB) for an ongoing trial of Vioxx used to prevent Alzheimer disease had ensured that subjects were made aware of this potential risk. However, an internal Merck document quoted by Nesi states “URGENT teleconference: Topic: Need to Set Up External DSMB for Ongoing Vioxx AD [Alzheimer’s Disease] Prevention Trial”. In short, Merck had not set up a DSMB, and it appears that they never did.

While Poison pills would be an enjoyable read for those interested in drug development, drug safety, and drug regulation, the book will leave most scientists flat. Nesi’s intended audience seems to be the lay public, and he focuses on revealing internal communications and personalities more than scientific issues. While the book mentions the discovery of COX isoforms, it does not adequately place this discovery in the context of drug development. Moreover, the scientific basis of selective COX2 inhibitors is not described completely accurately. This lack of attention to detail substantially dampened my confidence in Nesi’s depiction of other aspects of the Vioxx story.

There were several other topics that would have been important and interesting aspects of the larger Vioxx story that were missing from this book. First, it would have been important to critically examine the FDA’s role in this scandal. What did they know and when, and how has their complicity affected the public’s confidence in the drug regulatory system? The Vioxx scandal has been a major engine of regulatory and budgetary change in Washington, DC, which is not even mentioned in the book. Second, what role did external scientists to Merck play in this scandal? There were substantial findings from many reputable groups about Vioxx’s dangers; however, the data did not effectively move regulators to action. Many lessons can be learned about how to generate valid post-marketing surveillance data and how those findings should figure into the scientific and regulatory debate. Finally, it is imperative to examine how “blockbuster” drugs have come about, allowing pharmaceutical companies to reap billions of dollars of profits. This may be the root cause of the Vioxx scandal and speaks to broader issues of a health care industrial complex that has become one of the largest aspects of the US economy.