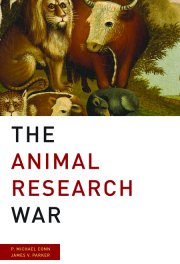 Unfortunately, the chilling account that opens P. Michael Conn and James V. Parker’s The animal research war is not at all unique. The transcontinental, coordinated targeting of a researcher by those who oppose the use of animal models is only one of countless examples of intimidation and harassment experienced by scientists across the United States and throughout the world. Conn, a senior scientist at the Oregon Health and Science University’s Oregon National Primate Research Center and a professor at the School of Medicine, and Parker, formerly the Public Information Officer for the Oregon National Primate Research Center, address head-on the heightened violence and increasing number of such incidents in this well-written, if occasionally disturbing, text.

The authors analyze the history, motivation, and development of the animal rights movement and examine the reactions of the American public, research institutions, and individual scientists. Conn and Parker place the rise of the movement within the context of formative influences: charismatic leadership (e.g., media-savvy PETA president and cofounder Ingrid Newkirk); the role of the media (bombs and protests make “better news” than a promising study in mice); urbanization (which led to the notion that ham comes from the supermarket, not from that cute pig); and the portrayal of animals by the entertainment industry (that cute, talking pig).

In confronting this controversial subject and the often violent tactics involved, the authors address the overarching strategies of the extremist movement, which include: (a) intimidating those affiliated with the research enterprise; (b) misrepresenting research; (c) recruiting students to the cause; (d) aligning animal rights activism with environmentalism; and (e) calling for the recognition of animals not as property, but as legal persons.

The authors make the case that the actions of animal rights extremists are, in fact, acts of domestic terrorism and a distinct threat to the continued advancement of human and animal health. Their case is bolstered by the recent signing in California of the Researcher Protection Act, which adds new misdemeanor offenses to the existing legislation. These include actions intended to chill or interfere with a university researcher’s academic freedom — for example, publicizing private information about researchers or their immediate families, or trespassing on researchers’ private property to commit a crime. This is a good first step. However, Conn and Parker also underscore that the threat to research isn’t just due to scientists leaving the field in the face of harassment and threats to themselves and their families; it is also reflected in students’ choices not to pursue a career in the life sciences, in research, or in laboratory veterinary care.

Conn and Parker see us all as “casualties” of the heightened levels of violence committed by opponents of animal research, as their actions hamper medical advancement and thereby endanger the health of all of us. While academic researchers and universities have certainly been the primary focus of the actions of the extremist movement, I would also have appreciated more references to the countless others who work in biomedical research and are likewise targeted: those at hospitals, private research institutes, contract research organizations, and corporations. This would give readers a stronger sense of the research community as a whole — a diverse group that now finds itself committed not only to life-saving research, but also, unfortunately, to self-defense.

Conn and Parker also identify perhaps the most basic problem to be overcome: the extensive work that must still be done to promote public education and outreach. Animal rights extremists misrepresent research with impunity, and those institutions that do not respond play directly into the hands of the opposition. The general public will largely remain ignorant of the small but crucial role that animals play in research. They will remain susceptible to the twisted image of animal research played out in the media.

Conn and Parker’s appeal in the last chapter is therefore neither surprising nor new; as part of this large and diverse research community, we all have a responsibility to inoculate the public against the oversimplified appeals used by extremists to justify intimidation and terrorism. We must all do more than agree that speaking out is important; we must actually stand up in support of research. To resolve this, we cannot rely solely on the voices of a handful of researchers, administrators, and spokespersons or on the few understaffed and drastically underfunded research advocacy associations. We must better educate students who will become either the next generation of activists or the next generation of researchers. An educated citizenry is the best hope for the necessary public support of research and the promotion of the safety and well-being of all those who work in the research enterprise. The authors help us here. Their overall message is clear, and they provide an appendix with excellent resources for beginning outreach and education.

The animal research war is a lively, occasionally terrifying account of the assault on animal research that will interest nonresearchers and researchers alike, and will be illustrative to those in law enforcement and public affairs and to the media reporting on this topic.