Motherhood, the elephant in the laboratory: Women scientists speak out 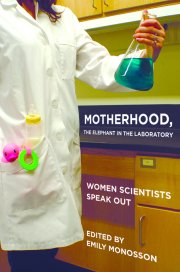 Being pregnant or raising children while doing scientific research can present many challenges to women scientists. While there are many reports on the increased dropout rate of women compared with men in the transition from graduate school to full professorship in the fields of science and engineering (1), there has not been much discussion of this issue by the women themselves, just as one does not discuss the “elephant in the room” out of embarrassment or taboo. In her book Motherhood, the elephant in the laboratory: women scientists speak out, editor Emily Monosson — an environmental toxicologist, writer, consultant, and mother — tackles the subject of balancing motherhood and a scientific career in an absorbing series of 34 vignettes written by women who have lived through the experience. Monosson summarizes the experiences of these women scientists and also tells of the evolution of her own career. This thought-provoking book will be of interest to science historians, other scientists who are mothers, and women scientists contemplating motherhood.

In biology, women make up 46% of the recent doctoral recipients, but they constitute only 30% and 15% of assistant and full professors, respectively (1). A similarly leaky pipeline is seen in other sciences. The sizable number of the women who train in the sciences but never enter the academic profession prompted a recent National Academy of Sciences report that provided several recommendations for eliminating gender bias in academia (1). Monosson and the other contributors to this book offer up many reasons why this pipeline leaks. The “elephant in the laboratory” to which Monosson refers possesses many distinctly different aspects, and one woman’s experience may not encompass all of the potential challenges. However, in synthesizing the stories of the various women’s experiences, Monosson aptly summarizes many of the challenges facing mothers with scientific careers, including the need for flexible work schedules. She points out that other modern democracies are ahead of the US in providing job patterns adapted to the needs of both male and female parents.

Science can be seen as one of the last vestiges of the apprenticeship system of the Middle Ages. A master craftsman (professor) takes on a trainee (graduate student) for up to 7 years. At the end of the training period, the apprentice creates a masterwork (thesis) and becomes a journeyman. The journeyman (postdoctoral fellow, generally male) travels from town to town, plying the craft, before finding a niche and becoming a new master, taking on new apprentices in a continuation of the cycle. This system imposes several restrictions that are often at odds with raising children: tight time constraints; a necessity for slavish devotion to duty, with few distractions allowed; a demanding, often male, master; and the requirement for flexibility if one needs to relocate to accept an appointment to a higher position.

The stories told by the women in this book illustrate the benefits of asking for longer periods of family leave, extra time to complete tasks, part-time positions, or a reduced workload to overcome the barrier of the biological clock. Many of the contributors found creative and clever solutions to the challenges of balancing career and motherhood, some realizing later that their male colleagues had in fact asked for and received reduced workloads in consideration of special situations. Some women had the courage to deviate from the academic-only career path their advisors stressed and became consultants, took time off work, taught at small schools, or worked in industry. Many women encountered unsympathetic advisors and colleagues who treated them as if they were less committed to science than their colleagues. In one inspiring — and recent — story, after being fired for being pregnant, a woman fought for and won maternity leave for other postdoctoral fellows. The postdoctoral, prefaculty stage seems to be the career point at which women are most susceptible to an overly demanding advisor. Some women question whether they want to become just like their advisors and buy into the more machismo aspects of a career in science. The preponderance of the women’s stories points to the need for a flexible spouse who is willing to move for the wife’s career and participate fully in raising the children. Geoscientist Carol B. de Wet captures a major sentiment for women in the book with her statement: “Ultimately it comes down to a personal view of one’s life. There is no one correct definition of success nor is there a single pathway to achieve it.”

Ganesha is an Indian deity with the head of an elephant who is revered as the Remover of Obstacles and a patron of arts, sciences, and wisdom. Perhaps he is the elephant we need in the laboratory. Understanding a problem is a big part of the solution, and this book helps us to better see the elephant, talk about it, and hopefully bring about changes that allow women to better balance motherhood with a career in the sciences.