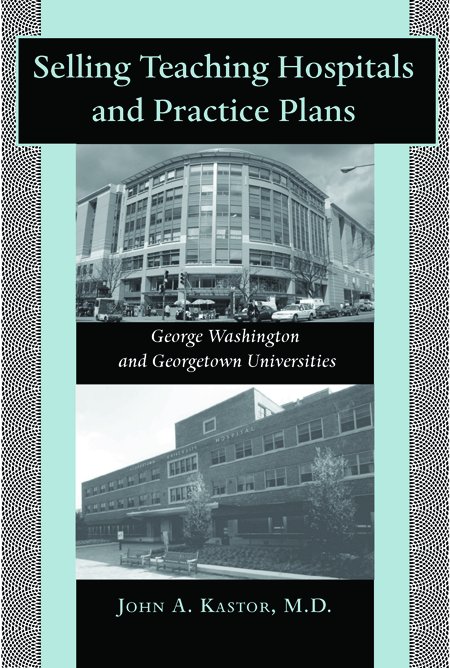 The financial and organizational upheavals that have beset academic medical centers in recent decades have been analyzed by John A. Kastor in a series of books, of which Selling teaching hospitals and practice plans:George Washington and Georgetown Universities is the fourth. Previous volumes dealt with such issues as crises in governance and mergers of academic medical centers. This latest volume details the financial and management strains that led to the sale of the aforementioned institutions’ teaching hospitals. Kastor’s analyses are valuable not only because of his own experiences as a former chair of a department of medicine in an academic medical center, but also because of the candor he provokes in his interviews with hundreds of physicians, administrators, and hospital and university leaders.

The first chapter examines some unique features of the social and medical environment in Washington, DC. Subsequent chapters provide a detailed analysis of events at George Washington University prior to the sale, followed by chapters dealing with the selling of the hospital and the faculty practice plan at Georgetown University. There are three useful appendices: Appendix A examines the current status of universities with teaching hospitals owned by for-profit companies; B details Kastor’s proposed solutions for reducing deficits and controlling finances at institutions that still own their hospitals; and C lists the 335 individuals he interviewed.

In the DC area, many choices for medical care are available to more affluent citizens at the major government medical institutions, such as the National Naval Medical Center and the Walter Reed Army Medical Center, as well as the nearby Johns Hopkins Medical Center. In contrast, Kastor notes the high percentage of low-income and often uninsured individuals living in the area. These circumstances posed significant financial problems for both George Washington and Georgetown University hospitals as demand for services to the indigent rose and reimbursement fell.

Kastor documents the deteriorating financial situation at each institution during the 1990s and the inevitable interpersonal struggles among leaders that ensued, involving millions of dollars in annual losses. At George Washington, there was only a limited endowment available to cover the losses; lack of capital prevented improvement of the facilities. Similar problems beset Georgetown, but Kastor outlines some distinctive issues there. The Jesuit leadership, in the opinion of those interviewed, was not always comfortable with its obligations to the medical school, hospital, or physicians. On the other hand, the medical center, during earlier times of financial security, was required to provide significant subsidies to the university, which were used to support other departments such as the humanities.

Kastor describes the often bitter disputes that arose in the last decade as successive leaders strove to reduce losses, deal with pressures from the parent universities, and cope with growing dissent from the increasingly embattled faculty. The personalities involved and their struggles are richly drawn, enlivening the narrative.

The two institutions became particularly vulnerable to rising operational deficits in a competitive environment, receiving little or no government subsidy for care of indigent patients and no significant philanthropic contributions, corporate or personal. Officials at both George Washington and Georgetown were simply unable to come up with effective solutions other than to sell the hospitals and practice plans.

George Washington University Hospital was sold in 1995 to a for-profit healthcare corporation, Universal Health Services Inc., and Georgetown University Hospital to a not-for-profit local group, MedStar Health, in 2000. Significant upgrades to the facilities followed. Kastor notes that research normally fuels innovation and recognition, yet both institutions lack broad research programs (in 2005, Georgetown and George Washington Universities ranked 60th and 90th, respectively, among 121 universities in the amount of NIH funding received). Healthcare corporations that acquire clinical practices and academic hospitals do not regard the educational and research functions of the medical school as essential, particularly if they are for-profit. How these vital missions of the schools can be achieved or even sustained under these circumstances remains a critical question.

Kastor attempts to distill some general principles that might help medical centers that still own their practice plans to avoid the separation of an institution’s clinical care arm from its teaching and research programs. What gives credibility to his proposals is the care with which he has developed them in consultation with leaders at other institutions. He avoids broad generalizations that sound impressive but may fail to apply to a specific institution’s distinctive history and environment.

Medical centers may be in for much more upheaval. Perhaps recently evolved management models will prove to be more durable; however, it is likely that further reorganization will occur. Kastor’s documentation of how the current era evolved should be helpful in understanding such change. This volume should be essential reading for leaders of academic medical centers, particularly at institutions threatened with loss of control of their practice plans and/or hospitals.