Fat: It’s not what you think 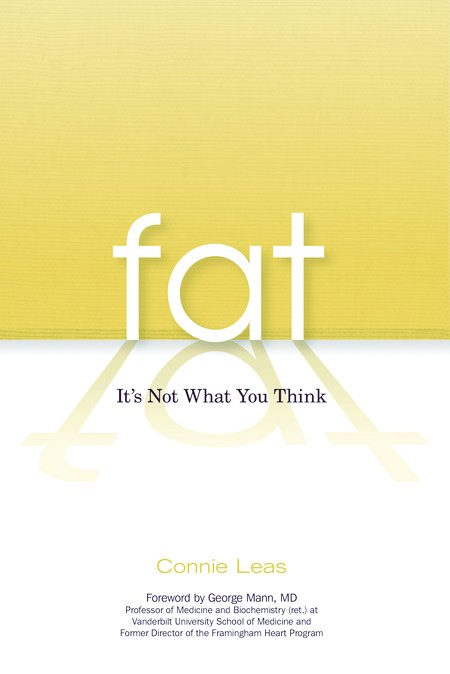 Freelance writer Connie Leas’ aptly-titled book, Fat: it’s not what you think, aims to educate lay and nonspecialist readers (and dispel some of the common misconceptions) regarding the health implications of fat — especially dietary fat. Leas draws upon the basic chemistry and biology of lipids, research data, and opinions and anecdotes from journalists and scientists to drive home the message that natural fat is good (i.e., eat butter instead of margarine). Although the pro-fat message is taken to an extreme in parts of the book, the closing chapters present cogent arguments that have me inspecting the ingredients labels in the grocery store with a more critical eye.

Leas begins by introducing aspects of fat — from fat cells and the chemical subtypes of fat to how fat is used and handled by the body. The important background information contained within the early chapters, while well organized, remains relatively dry. It might be easier for the lay reader to extract the information if a few take-home points were highlighted in each section.

Additionally, even though Leas took great pains to define fat tissue, fat cells, and specific types of fat, she continues to use the generic term “fat” to refer to each of these at times in subsequent chapters, with the result that sometimes it is unclear whether she is referring to fat tissue, lipids in general, or dietary fat. This is also true later on: Although Leas first nicely defines the chemical cholesterol and the lipoproteins (VLDL, LDL, and HDL), she then continues to refer to the lipoproteins as “cholesterol” from time to time. Some points would be easier to understand if the more precise terminology were used consistently.

Later chapters deal with the role of fat in obesity and of cholesterol in cardiovascular disease. While these sections contain some useful information, in parts I couldn’t help but notice some parallels in style with political editorials: none of the facts presented are incorrect, but only a subset of the available information has been presented so as to support a specific viewpoint, rather than painting a balanced picture. For instance, Leas has chosen not to discuss the myriad health consequences of true obesity, but rather focuses on the relative healthiness of people in the overweight category. Similarly, while aspects of cholesterol-lowering statin therapy are certainly reasonable to debate, Leas’ contention that a 25% decrease in the incidence of fatal myocardial infarction in middle-aged men receiving pravastatin over a five-year period, as noted in the large WOSCOPS study (1), is “not much” of a difference (her words) is difficult to swallow. Twenty-five percent fewer people dying seems to be a laudable result, even if only a small percentage of people die in a five-year period. Presumably, she pushes these perspectives on obesity and lipoproteins as hard as she does in order to build a more black-and-white case about lots of types “fat” being good for you.

I enjoyed the rest of the book, which focuses on dietary sources of a variety of lipids, both at the level of their chemistry and their potential health impact. First, Leas reviews saturated fats and oils and discusses current thinking about trans fats. The final three chapters make recommendations for how/what to eat and include nice discussions regarding low-fat diets and how federal farm policy affects the pricing and availability of foods in the United States. While the viewpoint here remains occasionally uneven, most of the information and the conclusions presented in these chapters are reasonable and will be useful for readers looking to make sense of the disorganized message conveyed by sound bytes in the mainstream media.

I do wish that there had been some more discussion geared toward caloric density. Fat, whether in natural meats or in vegetable shortening, increases the caloric density of foods, just like the high-fructose corn syrup that Leas justly berates. An important message that gets lost in the media, and which could use more emphasis here, is that even a “healthy” fat becomes unhealthy when you eat too much of it. Also, taking dietary supplements containing “healthy” fats won’t do much to help if you eat a generally unhealthy diet.

Overall, Leas does a good job educating the lay and nonspecialist reader about the meaning of the various fat terminologies bandied about by the media and provides useful information to help readers think through what fats to eat (and not eat) in light of the ongoing revisions in the scientific perception of various fats. I feel like I learned something from the book, and I am happy to have my preference for butter validated. Although this may represent a reaction to mistakes promulgated by the previous zealotry regarding the evils of dietary fat, some issues have been approached in an unbalanced way that pays short shrift to the downsides of fat. As such, I would note which points to take with a grain of salt when recommending this book to others.