Paradox of B cell–targeted therapies

Paradox of B cell–targeted therapies

The use of antibodies against the human B cell surface protein CD20 represents the most advanced therapeutic approach among the B cell–depleting armamentarium for the treatment of autoimmune disorders. However, recent evidence indicates that B cells can also be essential for suppressing unwanted autoaggressive T cell responses, and therefore, a more careful evaluation of which types of autoimmune disorders this therapy should be utilized for, and at which phases of disease this therapy should be applied, is necessary. In this issue of the JCI, Matsushita et al. report that the timing of this therapy is critical for the management of EAE, a mouse model of human MS (see the related article beginning on page 3420). The results suggest the existence of two opposite actions executed by B cells during the course of autoimmune pathology; CD1dhiCD5+ regulatory B cells suppress EAE induction, whereas B cells are required for the expansion of autoantigen-specific T cells during disease progression. Given the existence of such regulatory B cells in humans, these findings not only resolve previously unexplained contradictions with respect to the outcome of B cell–depleting therapy but also provide insight into the best regimen for this treatment approach.

Potential mechanisms of pro- and antiinflammatory effects of B cells. 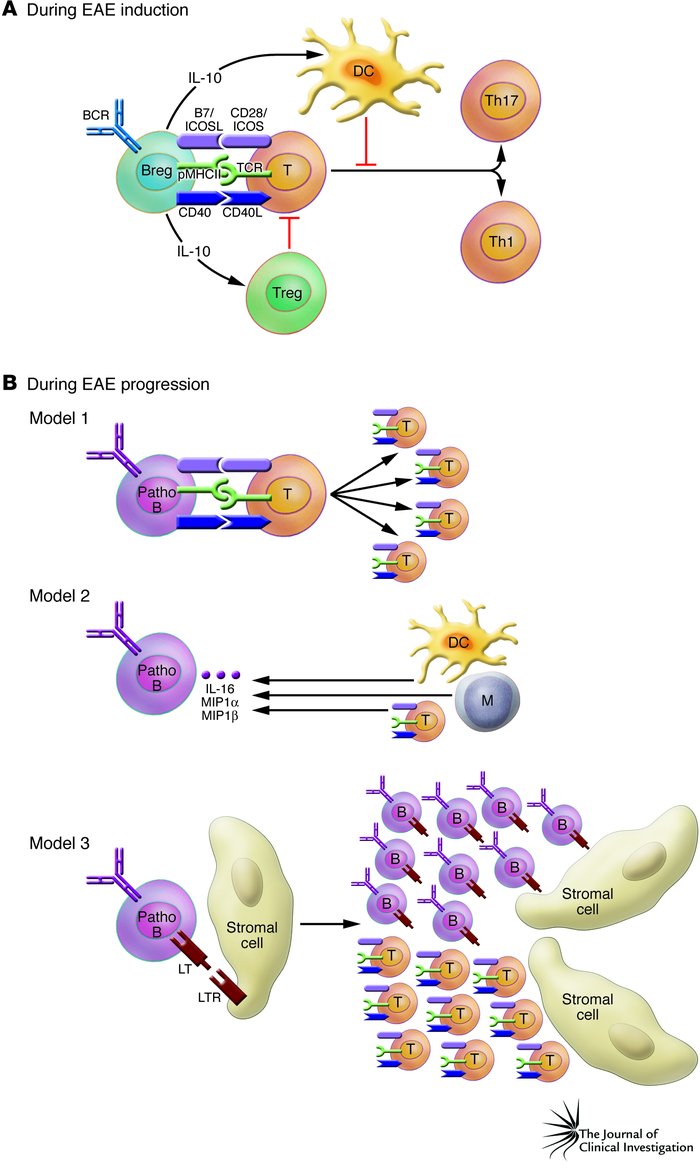 () In this issue of the , Matsushita et al. () show the importance of the antiinflammatory role of CD1dhiCD5+ regulatory B cells during EAE initiation. In the initiation phase of EAE, antigen-specific CD1dhiCD5+ B cells (Breg) produce IL-10, which limits DC function and/or augments Treg function. Consequently, these DCs and Tregs could inhibit the differentiation of Th17 and Th1 T cells. () During the progression phase of EAE, three potential models for the mechanism of action of B cells can be envisaged. In the first model, pathogenic B cells (Patho B) can function as antigen-presenting cells and enhance the proliferation of pathogenic T cells and their differentiation. In the second model, antigen-activated pathogenic B cells produce IL-16, macrophage inflammatory protein 1α (MIP1α), and MIP1β, which can modulate the migration and function of DCs, monocytes (M), and pathogenic T cells. In the third model, interactions between B cells and stromal cells via TNF/TNF receptor family networks (such as interaction of lymphotoxin [LT] with the LT receptor [LTR]) induce lymphoid-like follicle formation in the CNS, which might provide the optimal site for expansion of pathogenic T cells. B, B cell; BCR, B cell receptor; CD40L, CD40 ligand; ICOSL, ICOS ligand; pMHCII, peptide–MHC class II; T, T cell.