Critical: What we can do about the health-care crisis 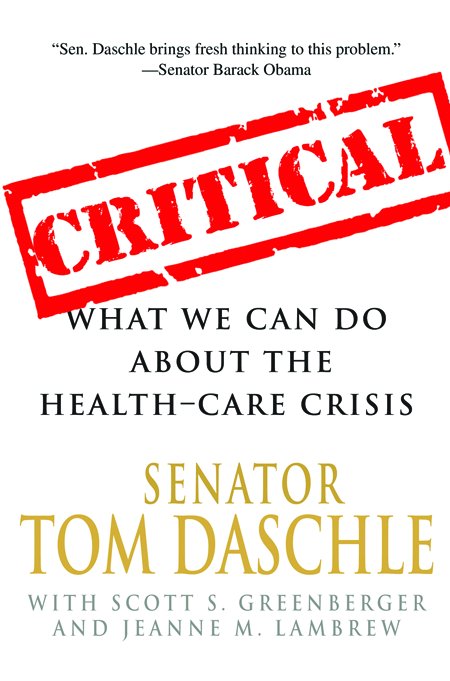 In Critical, former U.S. Senate Majority Leader Tom Daschle has joined with an experienced health policy journalist (Greenberger) and distinguished health policy scholar (Lambrew) to produce a reasonably concise and easily readable summary of the mainstream of current thinking among advocates of some form of universal health insurance coverage in the United States.

In Part One of the book, Daschle deploys a nice balance of statistics and anecdotes to illustrate the failings of the current U.S. health care system, including not only its cost and access problems but evidence of questionable quality and value. The emphasis on the economic risks associated with insufficient health insurance, such as the inability to get or hold a good job and ultimately bankruptcy, is especially to the point. The second part reviews the many failed efforts to create health insurance coverage for all Americans. Daschle credibly combines the major insights of a number of other studies, while adding his personal perceptions from his own involvement over the past three decades.

In Part Three, Daschle argues that failure has been due not to ideological disagreement but to a lack of trust in politicians. His claim that there has been a “consensus in the middle of the spectrum . . . that we should create a public-private hybrid that preserves our private system within a strengthened public framework” does not demonstrate consensus even if it were true, as there has been no agreement about matters such as the terms of any public framework and who would pay for it, and the middle, in any case, is not necessarily a majority. Nevertheless, health care reform must directly influence individual voters’ lives, and so it depends especially on trust, yet Americans don’t trust their politicians. The solution, he argues, is to create a Federal Health Board, modeled on the Federal Reserve Board, which could make key decisions.

Part Four explains that the Federal Health Board would operate within a reform context similar to proposals made by major Democratic candidates in the 2008 presidential campaign. Medicaid would be expanded; private health insurance would be made more broadly available through a system of subsidies and would be marketed through an open version of the Federal Employees Health Benefits Program (FEHBP); an expanded version of Medicare would be made available to all Americans for purchase through the FEHBP; employers would be required to subsidize their employees’ coverage directly or make a contribution to the FEHBP insurance pool; and individuals would be required to purchase one of the coverage options (unless eligible for Medicaid), and their premium expenses would be subsidized by a refundable tax credit. The complexity of health policy is shown by all other decisions that would be left to the Federal Health Board. Among these would be defining the minimum benefit package (including parity for mental health care); regulating insurance marketing; standardizing medical records across all federal health care programs (including the Veterans Health Administration, Medicare, and Medicaid); and improving value in all federal programs through new quality measures, new methods of “paying for performance” (P4P), and approving or setting prices for new procedures based on cost-effectiveness research. Daschle argues that applying such reforms to the 100 million Americans (at a minimum) covered by the federal programs (including voluntary Medicare) would create “tremendous pressure on everybody else to follow suit”.

In Part Five of the book, Daschle suggests that in some ways the prospects for reform are better than in the early 1990s. Yet there are still many ways that opponents can raise fear about any reform. He believes the Federal Health Board could defuse some of the public’s distrust of politicians and so of reform itself. And it could offer cost control because it “would make tough coverage decisions, collect evidence, identify weaknesses in our system, and align federal health programs”.

This book provides solid information about the condition and history of the U.S. health care system and a fine introduction to the central tendencies among Democratic party politicians and think-tank scholars as the health care reform debate heats up again. Yet it is far too optimistic about political divisions and some of the ideas for reform. Readers would be better served if they paired this book with Tim Jost’s Health care at risk, which explains the ideological stakes (1). The advocacy of P4P, cost-effectiveness analysis, and other such measures reveals that the health policy community is guilty of the same promotionalism for untested techniques that Daschle rightly criticizes on the part of physicians, drug companies, and device companies. Even fervent advocates of cost-effectiveness analysis must admit that in many ways it has not met expectations (2). Finally, Daschle seems to forget that Medicaid and the State Children’s Health Insurance Program are programs run mostly by the states, and the states are not likely to accept having the Federal Health Board impose much more detailed terms for their coverage and management. Yet the core institutions Daschle suggests would be a major improvement on the status quo.