Directed gene transfer into specific cell lineages in vivo is an attractive approach for both modulating gene expression and correcting inherited mutations such as emphysema caused by human α1 antitrypsin (hAAT) deficiency. However, somatic tissues are mainly comprised of heterogeneous, differentiated cell lineages that can be short lived and difficult to specifically transfect. Here, we describe an intratracheally instilled lentiviral system able to deliver genes selectively to as many as 70% of alveolar macrophages (AMs) in the mouse lung. Following a single in vivo lentiviral transduction, genetically tagged AMs persisted in lung alveoli and expressed transferred genes for the lifetime of the adult mouse. A prolonged macrophage lifespan, rather than precursor cell proliferation, accounted for the surprisingly sustained presence of transduced AMs. We utilized this long-lived population to achieve localized secretion of therapeutic levels of hAAT protein in lung epithelial lining fluid. In an established mouse model of emphysema, lentivirally delivered hAAT ameliorated the progression of emphysema, as evidenced by attenuation of increased lung compliance and alveolar size. After 24 weeks of sustained gene expression, no humoral or cellular immune responses to hAAT protein were detected. Our results challenge the dogma that AMs are short lived and suggest that these differentiated cells may be a possible target cell population for in vivo gene therapy applications, including the sustained correction of hAAT deficiency.

Kinetics of in vivo gene expression after lentiviral transduction. 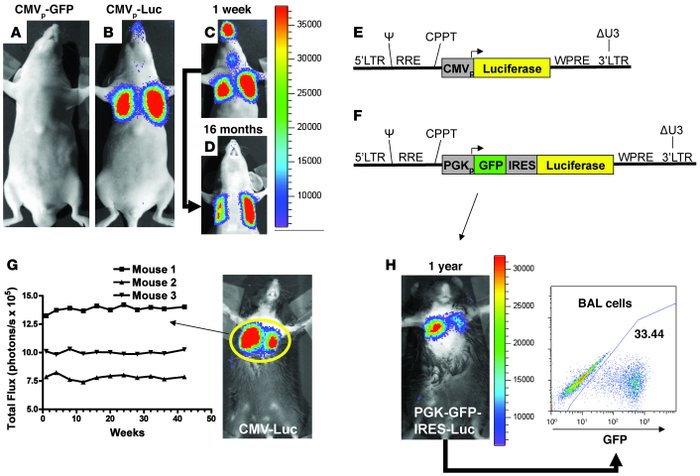