William and Lawrence Bragg, father and son: The most extraordinary collaboration in science 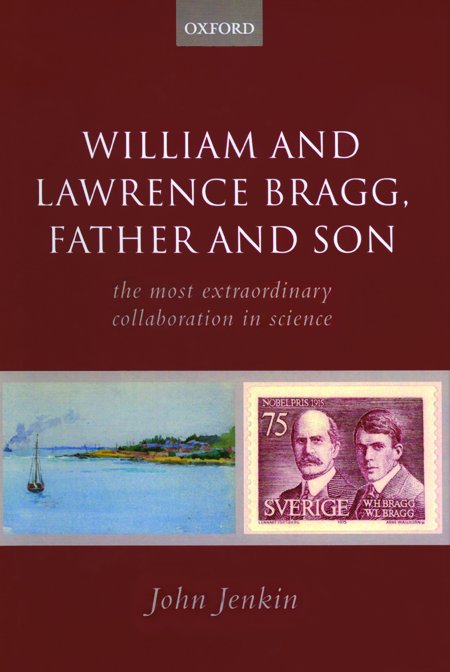 In William and Lawrence Bragg, father and son, John Jenkin, physicist and Honorary Associate of the Philosophy Program at Australia’s La Trobe University, closely follows the professional and personal lives of William Henry Bragg (William) and William Lawrence Bragg (Lawrence), father-and-son physicists whose work on the x-ray analysis of crystal structure earned the duo the joint Nobel Prize in Physics in 1915. Then just 25 years of age, Lawrence Bragg remains the youngest-ever Nobel laureate.

Jenkin devotes the first three-quarters of the book to father William. Born in the United Kingdom in 1862, William studied physics at Trinity College and the Cavendish Laboratory, Cambridge. Present-day students will likely be astonished to read of the heavy load of mathematics, Greek, Latin, and French that had to be absorbed by William and his fellow students. In 1886, he assumed a professorship of Mathematics and Physics at the University of Adelaide, Australia. Jenkin presents a lot of the early science of x-rays, γ-rays, radioactivity, α-particles, and electrons, as well as some history of the quarrels between scientists about the nature of these — at the time — newly discovered phenomena. While of interest to physicists, the level of scientific detail in these sections may be too great for the less scientifically oriented reader.

Born in Adelaide in 1890, son Lawrence earned his degree in mathematics from the University of Adelaide. Jenkin shifts his focus primarily to Lawrence in the last quarter of the book after the arrival of the family in England, where William had accepted a professorship at the University of Leeds. Lawrence subsequently entered the University of Cambridge. The year 1912 was pivotal in Lawrence’s future, and the report of this period by the author is the best part of the biography. The seed of what was to follow was planted in Germany. German physicist Max Laue proposed that x-rays would cause a diffraction pattern in a medium such as crystal. Two of Laue’s coworkers tested his theory experimentally and discovered that a crystal of copper sulfate diffracted x-rays. Laue published the underlying mathematical formulation in 1912. Interestingly, Jenkin reveals how little communication existed between the Braggs and other high-profile German physicists before this discovery. In fact, William first became aware of Laue’s experiment two months later and only because a Norwegian friend sent him the information from Germany. The Braggs drew on the work of Laue and others, and their subsequent experimental work allowed them to conclude that the diffraction of x-rays by a crystal can simply be regarded as reflection against planes of atoms in the crystal. From this point onward, this knowledge provided the basis for a flood of new discoveries in the fields of chemistry, materials science, and, later, biology. However, the ensuing wave of scientific discovery was interrupted in 1914 by World War I and the tragedies it wrought. Their work on the theory and technique of x-ray diffraction garnered them the Nobel Prize in 1915; however, neither could attend the ceremony in Sweden because Lawrence was at that moment serving in the British army in France, and his father was occupied with military research in London. Lawrence’s younger brother, Robert, was killed in action in 1915, and Jenkin relates Robert’s war experiences with a detailed account of the failed military campaign that took his life in Turkey.

The postwar period is well described in the penultimate chapter. In 1937, Lawrence moved to Cambridge, becoming head of the famous Cavendish Laboratory. The great triumph of this laboratory under Lawrence’s leadership is the penetration of x-ray structure determination into the field of biology. Examples include the determination of the most complicated structures of proteins, pioneered by Max Perutz and John Kendrew, and conversely, of the simple but most elegant structure of DNA, discovered by James Watson and Francis Crick. The author devotes not more than a few pages to a discussion of the relevance of the technique to biology, probably because much has already been published about it.

Although x-rays play an important diagnostic and therapeutic role in radiology today, Jenkin focuses largely on the physics underlying this tool and also provides extensive insight into the education of upper-middle-class British children during the period between 1860 and 1940. At several times throughout the book, Jenkin strays, and in too much detail, from his two main players. For example, in addition to a six-page account of Robert Bragg’s military actions, Jenkin devotes more discussion than necessary to Archdeacon Farr, who married William and his wife, Gwendoline Todd, and Farr’s church in Adelaide. However, despite this criticism, it must be stated that this biography represents an important and well-documented contribution to the history of science. This reader acknowledges the enormous task it must have been for Jenkin to consult the extremely large number of references as well as other public and private sources in order to forge the Braggs’ history into such a scholarly book. I recommend this book to historians of science and to physicists and x-ray crystallographers with an interest in the history of their chosen field of research.