How irritating: the role of TRPA1 in sensing cigarette smoke and aerogenic oxidants in the airways

How irritating: the role of TRPA1 in sensing cigarette smoke and aerogenic oxidants in the airways

Airway irritants cause a variety of lung pathologies. Two separate studies, the first recently reported in the JCI by Bessac et al. and the second reported by Andrè et al. in the current issue of the JCI (see the related article beginning on page 2574), have identified irritants that activate transient receptor potential cation channel, subfamily A, member 1 (TRPA1) receptors in airway sensory neurons, resulting in neurogenic inflammation and respiratory hypersensitivity. The identification of TRPA1 activation by toxicants from cigarette smoke and polluted air, such as crotonaldehyde, acrolein, and oxidizing agents such as hydrogen peroxide, is an important finding. These two studies enhance our understanding of how pollution and cigarette smoke can damage airway function and will hopefully pave the way for the development of rational alternative therapeutics for such airway injury.

A schematic overview of the airway-sensory neuron unit. 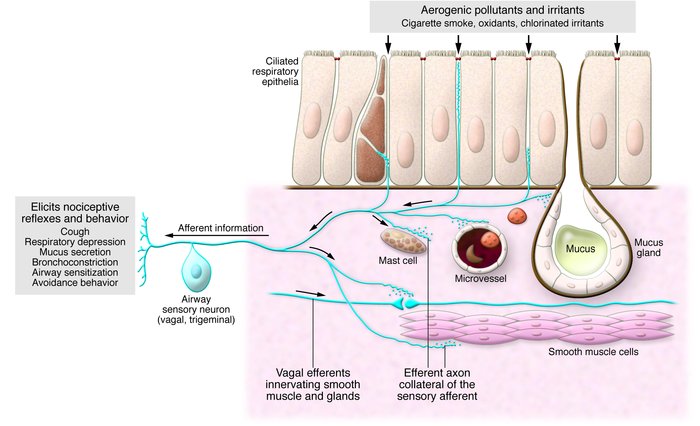 Sensory neurons, with their soma located in vagal (nodose or jugular) or trigeminal ganglia, extend processes into the submucous layer, reaching even into the single-cell layer of ciliated airway epithelial cells. Collaterals of the afferent axons innervate mast cells, capillaries, smooth muscle cells, and exocrine glands. Exposure to airway irritants can elicit nociceptive reflexes via activation of airway nociceptive sensory neurons and their afferent inputs being processed via synaptic relay in the brainstem. These protective reflexes can lead to coughing, respiratory depression until respiratory arrest, mucus hypersecretion, bronchial hyperresponsiveness, and avoidance behavior. Axonal collaterals can mediate the same consequences, without synaptic relay, via secretion of the neuropeptides bradykinin and calcitonin gene–related peptide, a process that is also referred to as neurogenic inflammation. Adapted with permission from Taylor & Francis ().