The pregnane X receptor (PXR) and the constitutive androstane receptor (CAR) are closely related orphan nuclear hormone receptors that play a critical role as xenobiotic sensors in mammals. Both receptors regulate the expression of genes involved in the biotransformation of chemicals in a ligand-dependent manner. As the ligand specificity of PXR and CAR have diverged between species, the prediction of in vivo PXR and CAR interactions with a drug are difficult to extrapolate from animals to humans. We report the development of what we believe are novel PXR- and CAR-humanized mice, generated using a knockin strategy, and Pxr- and Car-KO mice as well as a panel of mice including all possible combinations of these genetic alterations. The expression of human CAR and PXR was in the predicted tissues at physiological levels, and splice variants of both human receptors were expressed. The panel of mice will allow the dissection of the crosstalk between PXR and CAR in the response to different drugs. To demonstrate the utility of this panel of mice, we used the mice to show that the in vivo induction of Cyp3a11 and Cyp2b10 by phenobarbital was only mediated by CAR, although this compound is described as a PXR and CAR activator in vitro. This panel of mouse models is a useful tool to evaluate the roles of CAR and PXR in drug bioavailability, toxicity, and efficacy in humans.

Crosstalk between PXR and CAR. 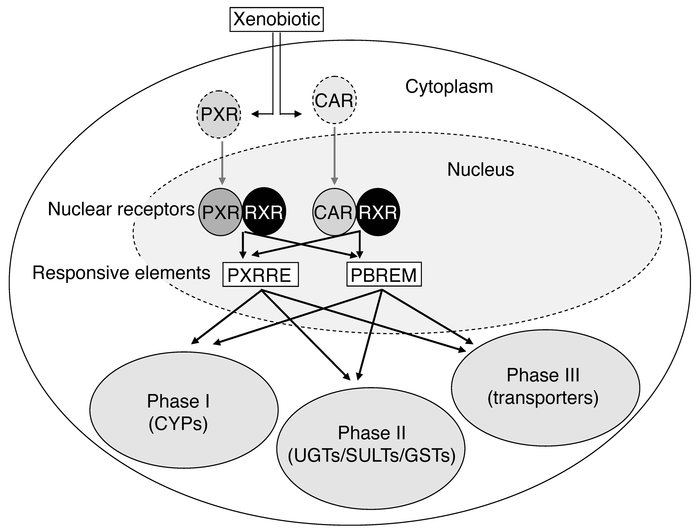 A multitude of xenobiotics can interact with PXR or CAR or both. Ligand binding leads to the translocation of the receptor from the cytoplasm to the nucleus, where both PXR and CAR use the retinoic X receptor (RXR) as a partner for heterodimerization and bind to corresponding -acting elements of their target genes. PXR and CAR mediate gene regulation through certain direct repeats, known as the PXR responsive element (PXRRE) and the PB responsive element module (PBREM). Target genes that contain PXRREs and PBREMs in their promoters can be regulated both by PXR and CAR. Among those that are subject to PXR and CAR regulation are a number of genes encoding phase I or phase II drug-metabolizing enzymes or transporters. UGT, uridine diphosphate-glucuronosyltransferase; SULT, sulfotransferase; GST, glutathione S-transferase.