Elizabeth Blackburn and the story of telomeres: Deciphering the ends of DNA 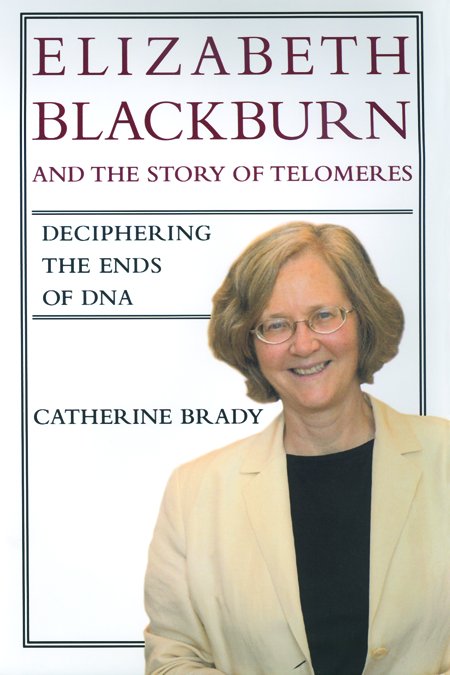 In the early 1980s, Elizabeth Blackburn made a discovery that changed cell biology. Working with Jack Szostak, she engineered a “minichromosome” in yeast that could be stably replicated and passed to daughter cells. The crucial element behind this success was the addition of artificial telomeres onto the ends of the synthetic chromosome, which protected and stabilized the linear DNA. This experiment married Blackburn’s pioneering work in the study of telomeres in the protozoan Tetrahymena with Szostak’s expertise in yeast genetics. The results established that telomeres are special DNA structures that protect the ends of chromosomes and sparked a furious race to discover the enzymatic machinery (telomerase) that maintains telomere length, as many believed telomere function would be of significant importance in human cancer and aging.

This seminal telomere work, the characterization of telomerase by Blackburn and her student and subsequent collaborator Carol Greider, and the wide-ranging implications of these findings for human biology are beautifully described by Catherine Brady in the biography Elizabeth Blackburn and the story of telomeres. The importance of the science is enriched by descriptions of Blackburn’s career development, her approach to science, her ability to succeed as a woman in a male-dominated profession, and her brief extracurricular career as a presidential advisor. Blackburn is a compelling subject for this treatment: in addition to her pioneering work, she has served as a mentor and inspiration to many junior scientists, has garnered science’s highest accolades, and has served as a sober voice of reason in the stem cell debate.

Although I found the sections of the book on Blackburn’s early work most interesting, the chapters describing Blackburn’s ill-fated role on the President’s Council on Bioethics also make for particularly good reading. Many of us wondered why, in 2001, a scientist of Blackburn’s caliber would become involved with a seemingly partisan committee formed to advise the Bush White House on embryonic stem cell policy. Many biologists worried that this committee was destined to reach conclusions about the stem cell debate antithetical to data-driven science. Brady reveals that Blackburn felt a duty to bring dispassionate skepticism to discussions of this emotionally charged issue. Ultimately, Blackburn’s attempts to inject balance into the council’s position papers proved too much for partisan members of the council, and in early 2004, she was unceremoniously kicked off the committee. Such rough handling of a scientific legend provoked a bipartisan furor, but Blackburn weathered this storm with dignity.

I suspect many will read this book with the question in mind of why there are so few women among senior faculty in the sciences. In Blackburn’s case, mentoring appears to have played a key role. Brady describes how the acceptance and support of Blackburn as a “genderless” scientist by her postdoctoral mentor at Yale, Joseph Gall, was critical to her early development. The importance of mentoring is further underscored by the exceptional observation that more than half of the top scientists in the telomere field are women, a large number of whom were trained by Blackburn or one of her proteges. Despite her talent and determination to be successful as a junior scientist, it should be acknowledged that Blackburn did not have children until after she obtained the lofty rank of full professor. Balancing family and work is still an unsolved problem for junior scientists of both sexes, and Blackburn’s story does not appear to offer any magical solutions here.

A few issues detract from the book as a whole. First, there are too many names cited, with emphasis accorded to even minor players in the story. As someone in the field, I know many of the individuals involved, and even I had a hard time keeping up with who was who. Also, Blackburn’s conflicts with other administrators while a departmental chair at UCSF are overly detailed. Turf wars over office space, revenue streams, etc. will be wearily familiar to anyone who has spent time at a research university and reminds one of the adage that “the fights are so bitter because the stakes are so low.” Finally, while Blackburn’s work is artfully described, the implications of this work in humans are oversimplified. With regard to cancer, would-be telomere-based antineoplastics are at very early preclinical stages, and the utility of such approaches in human cancer is far from established. The role of telomeres in human aging is even murkier. In genetically engineered mice, telomerase deficiency does not accelerate physiologic aging, proving that aging in this mammalian model system is telomere independent. While there are reasons to believe the case may be different in humans, at present, a skeptic would not be convinced of a causal role of telomere dysfunction in human aging. In fairness, telomerase inhibitors might soon make terrific antineoplastics, and/or telomere dysfunction may prove to be a driving force in human aging, but the biography does not fully capture the vibrant, ongoing scientific debate surrounding these issues.

These concerns notwithstanding, this book is a lively read that will be of interest to nonscientists and scientists alike, particularly those interested in the history of science, chromosomes, and telomeres; the relationship between cancer and aging; the role of gender in the workplace; or the embryonic stem cell debate. In summary, this is a superb treatment of an inspired scientist and her groundbreaking work.