Vectors derived from adeno-associated virus (AAV) are promising for human gene therapy, including treatment for retinal blindness. One major limitation of AAVs as vectors is that AAV cargo capacity has been considered to be restricted to 4.7 kb. Here we demonstrate that vectors with an AAV5 capsid (i.e., rAAV2/5) incorporated up to 8.9 kb of genome more efficiently than 6 other serotypes tested, independent of the efficiency of the rAAV2/5 production process. Efficient packaging of the large murine Abca4 and human MYO7A and CEP290 genes, which are mutated in common blinding diseases, was obtained, suggesting that this packaging efficiency is independent of the specific sequence packaged. Expression of proteins of the appropriate size and function was observed following transduction with rAAV2/5 carrying large genes. Intraocular administration of rAAV2/5 encoding ABCA4 resulted in protein localization to rod outer segments and significant and stable morphological and functional improvement of the retina in Abca4–/– mice. This use of rAAV2/5 may be a promising therapeutic strategy for recessive Stargardt disease, the most common form of inherited macular degeneration. The possibility of packaging large genes in AAV greatly expands the therapeutic potential of this vector system. 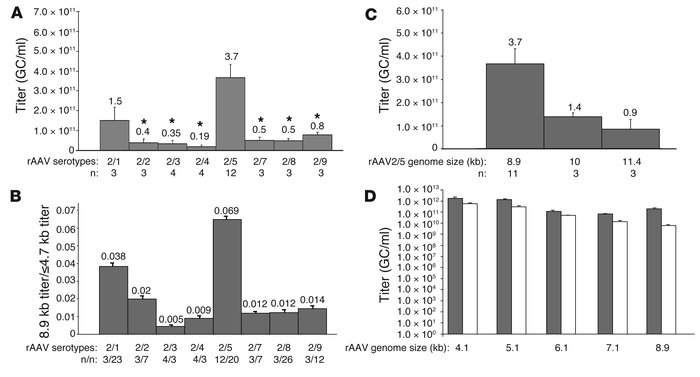 () Average titers of rAAV2/1, 2, 3, 4, 5, 7, 8, and 9 containing the cDNA. The rAAV genome is composed of AAV2 ITRs, CMV promoter, and cDNA sequence (rAAV genome size 8.9 kb). Data are shown as average ± SE. *0.05, compared with rAAV2/5; , number of rAAV large preparations. The numbers above the SE bars represent the average titers. () Large genome to small genome titer ratio for each of the rAAV serotypes tested (average ± SE). The large genome was represented by (rAAV genome size 8.9 kb). The small genomes (containing various transgenes) were 4.7 kb or less. , number of rAAV preparations. () Average titers ± SE of rAAV2/5-CMV- vectors with genome size of 8.9, 10, and 11.4 kb. The 10- and 11.4-kb genomes were obtained by adding 1.1 and 2.5 kb of stuffer sequence, respectively, to the rAAV2/5-CMV- genome. The numbers above the SE bars represent the average titers. () Average titers (±SE) of rAAV2/5- (gray bars) and rAAV2/2-CMV- (white bars) vectors with genome sizes of 4.1, 5.1, 6.1, 7.1, and 8.9 kb. The different-size genomes were obtained by adding stuffer sequences of different lengths after the poly(A) sequence in the pAAV2.1-CMV- plasmid. The results shown are the average of titers obtained by RT-PCR from 3 small-scale vector preparations.