Type 2 diabetes (T2D) frequently occurs in the context of abnormalities of plasma lipoproteins. However, a role for elevated levels of plasma cholesterol in the pathogenesis of this disease is not well established. Recent evidence suggests that alterations of plasma and islet cholesterol levels may contribute to islet dysfunction and loss of insulin secretion. A number of genes involved in lipid metabolism have been implicated in T2D. Recently an important role for ABCA1, a cellular cholesterol transporter, has emerged in regulating cholesterol homeostasis and insulin secretion in pancreatic β cells. Here we review the impact of cholesterol metabolism on islet function and its potential relationship to T2D.

The role of ABCA1 and cholesterol in β cell function. 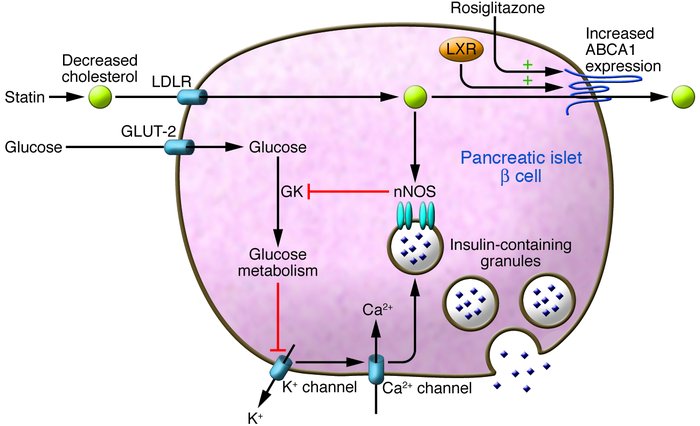 The points of potential impact of islet cholesterol levels on insulin secretion are shown. Glucose enters the β cell via a glucose transporter (GLUT-2 in rodents), whereupon it is modified by GK in the rate-limiting step in glucose sensing. The subsequent glucose metabolism pathway results in closing of the ATP-sensitive potassium channel, membrane depolarization, calcium influx into the cell via the L-type calcium channel, and exocytosis of insulin-containing granules. Cholesterol is taken up in islets by the LDL receptor. ABCA1 regulates the efflux of cellular cholesterol, and in the absence of β cell ABCA1, cellular cholesterol content increases. LXR is a major transcriptional activator of , and deletion of LXR results in a similar phenotype to that observed in the absence of β cell ABCA1. Elevated β cell cholesterol levels may impair insulin secretion by promoting the dimerization of nNOS, which downregulates GK, thus impairing glucose sensing. It is possible that cholesterol also inhibits distal steps in insulin exocytosis and that ABCA1 has other independent effects on insulin secretion. Cholesterol-lowering drugs such as pravastatin may reduce the incidence of diabetes, potentially by protecting the β cell from cholesterol overload. Rosiglitazone, a member of the thiazolidinediones, requires ABCA1 for part of its beneficial effect on β cell function, suggesting that targeted therapies that activate β cell ABCA1 may have favorable effects on T2D.