In striking contrast to HIV infection, natural SIV infection of African nonhuman primates is asymptomatic and usually does not induce significant CD4+ T cell depletion despite high levels of virus replication. Recently, significant progress has been made in understanding the mechanisms underlying the remarkable difference in infection outcome between natural and nonnatural HIV/SIV hosts. These advances include the identification of limited immune activation as a key factor protecting natural SIV hosts from AIDS and the discovery of low CC chemokine receptor 5 expression on CD4+ T cells as a specific and consistent immunologic feature in these animals. Further elucidation of the pathways by which the differences in immune activation between natural and nonnatural hosts are manifest holds promise for the design of novel therapeutic approaches to HIV infection. 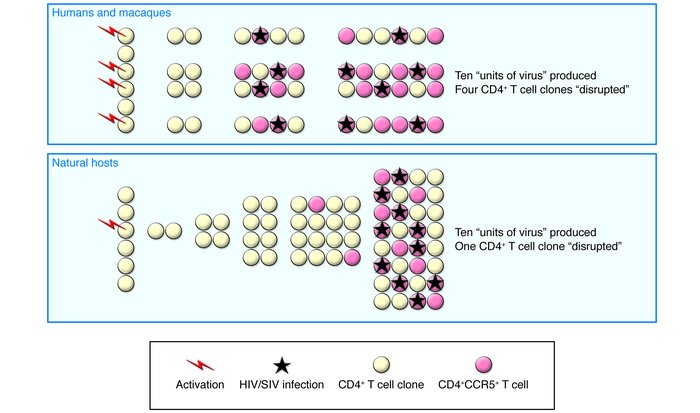 This figure shows how, in SIV-infected SMs (natural hosts), low immune activation, expressed as the fraction of CD4+ T cell clones that undergo activation at any given time, may act in concert with reduced and/or delayed expression of CCR5 in promoting a steady state where immune system homeostasis is preserved despite high virus replication. The top row shows how in HIV-infected humans and SIV-infected RMs, presence of a high fraction of activated CD4+ T cell clones results in the rapid accumulation of CD4+ T cells expressing CCR5 that are infected and killed by the virus, resulting in the disruption of the homeostasis of these activated clones. In SIV-infected SMs (bottom row), a smaller fraction of CD4+ T cells clones are activated, but a delayed and reduced expression of CCR5 on these cells may allow for their accumulation, resulting in an equally high level of virus replication when CCR5 is finally expressed. In this case, however, the homeostasis of fewer CD4+ T cells clones is disrupted at any given time.