In striking contrast to HIV infection, natural SIV infection of African nonhuman primates is asymptomatic and usually does not induce significant CD4+ T cell depletion despite high levels of virus replication. Recently, significant progress has been made in understanding the mechanisms underlying the remarkable difference in infection outcome between natural and nonnatural HIV/SIV hosts. These advances include the identification of limited immune activation as a key factor protecting natural SIV hosts from AIDS and the discovery of low CC chemokine receptor 5 expression on CD4+ T cells as a specific and consistent immunologic feature in these animals. Further elucidation of the pathways by which the differences in immune activation between natural and nonnatural hosts are manifest holds promise for the design of novel therapeutic approaches to HIV infection.

Dynamics of the CD4+ T cell pools during pathogenic and nonpathogenic lentiviral infections. 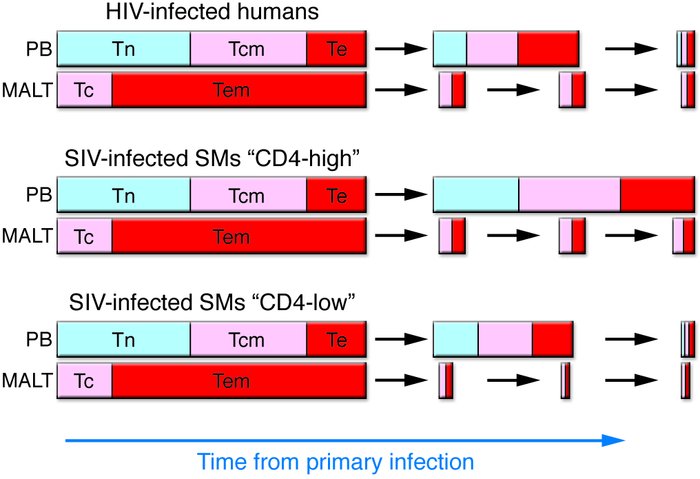 This figure represents the changes induced by HIV/SIV infection in the size of the pools of naive (Tn, blue), memory (Tcm, pink), and effector (Tem, red) CD4+ T cell subsets in both peripheral blood (PB) and MALT. The top row shows how HIV infection is associated with rapid decline of the mucosal CD4+ T cells and much slower, but eventually very severe, depletion of the circulating pool of CD4+ cells (this latter event is associated with progression to AIDS). The middle row shows how nonpathogenic SIV infection of SMs is associated, in approximately 90% of cases, with preservation of the peripheral pool of CD4+ T cells but a rapid depletion of the same cells in mucosal tissues. The bottom row shows how a minority of SIV-infected SMs experience a severe depletion of CD4+ T cells in both peripheral blood and MALT — and yet do not exhibit any clinical signs of AIDS. The term “CD4-low” refers to the small subset (~3%–5%) of SIV-infected SMs with CD4+ T cell counts below 200 cells/mm2.