When EGF is offside, magnesium is wasted

When EGF is offside, magnesium is wasted

Our understanding of magnesium (Mg2+) regulation has recently been catapulted forward by the discovery of several disease loci for monogenic disorders of Mg2+ homeostasis. In this issue of the JCI, Groenestege et al. report that their study of a rare inherited Mg2+ wasting disorder in consanguineous kindred shows that EGF acts as an autocrine/paracrine magnesiotropic hormone (see the related article beginning on page 2260). EGF stimulates Mg2+ reabsorption in the renal distal convoluted tubule (DCT) via engagement of its receptor on the basolateral membrane of DCT cells and activation of the Mg2+ channel TRPM6 (transient receptor potential cation channel, subfamily M, member 6) in the apical membrane. These authors show that a point mutation in pro-EGF retains EGF secretion to the apical but not the basolateral membrane, disrupting this cascade and causing renal Mg2+ wasting. This work is another seminal example of the power of the study of monogenic disorders in the quest to understand human physiology. 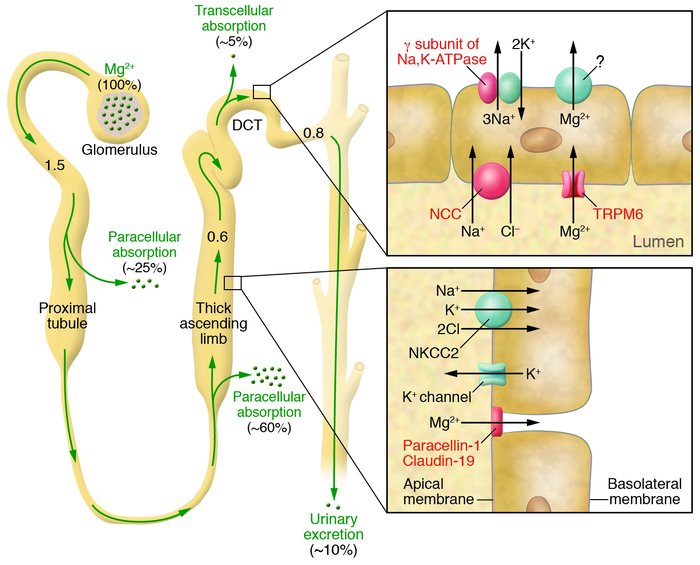 Non–protein bound Mg2+ is filtered freely at the glomerulus, and the approximate percentages of filtered Mg2+ absorbed at different locations are shown. Under most physiologic conditions, about 10% of filtered Mg2+ is excreted. The final regulatory segment, the DCT, controls approximately 5% of filtered Mg2+. Mg2+ is transported by both the paracellular and transcellular pathways. Four monogenic diseases that lead to renal Mg2+ wasting as a result of mutations in the genes coding for the proteins shown in red have been described to date. Mutations in paracellin-1 and claudin-19 are involved in familial hypomagnesemia with hypercalciuria and nephrocalcinosis (FHHNC). Mutations in TRPM6 are involved in HSH. Mutations in NaCl cotransporter are involved in Gitelman syndrome, and mutations in the γ subunit of Na,K-ATPase are involved in autosomal dominant renal hypomagnesemia with hypocalciuria (ADRHH). The question mark indicates unknown pathways; the numbers 1.5, 0.6, and 0.8 indicate Mg2+ concentrations in moles in the lumen of the respective segment. NKCC2, Na,K-2Cl– cotransporter.