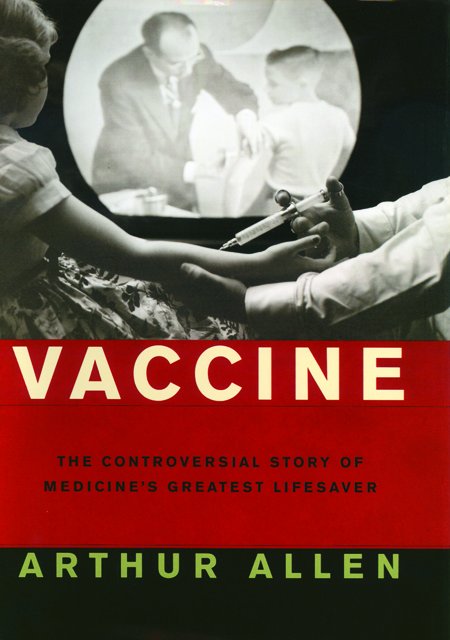 In Vaccine: the controversial story of medicine’s greatest lifesaver, Arthur Allen, a renowned journalist, highlights and debates the complexities of the intersection of basic science, public health, the pharmaceutical industry, and consumers in the advent and history of vaccine design and development. This is a timely and heavily researched book that intelligently and thoughtfully takes the reader through the fusion of the above factors and provides a comprehensive understanding of the issues at play in the world of vaccines today. Although the text is, at times, number- and date-heavy, this is a great read that will appeal to many.

The book begins with the as-ever fascinating description of the link between Edward Jenner’s observation that cowpox can provide protection against the deadly human smallpox and the age-old process of variolation, which resulted in the birth of vaccines. The reader is left with mental images of diseased cows being dragged through the streets of Paris in order for the contents of their sores to be inoculated into the arms of waiting children. How far we have come in just over 200 years. Even in these early days, skeptics and nonbelievers in vaccines, such as Cotton Mather, emerged and vilified the use of the vaccine based on religious grounds and dispute over human interference with the natural functioning of the body. Vaccine strategies have successfully eradicated smallpox from the world, although with some notable human costs. Vaccine’s ultimate theme is the exploration of the cost/benefit ratio of vaccination and elucidating where the best balance lies.

The book goes on to provide an in-depth history of the development of the polio vaccines by Salk and Sabin, while highlighting the associated pitfalls. Allen emphasizes the difficulties encountered with such vaccines at both the scientific and social levels. Later, Allen turns to explore, and ultimately refute, evidence that the mercury content of vaccines or the single measles, mumps, and rubella (MMR) shot can be linked to autism in children. The author manages to succeed in the task of bringing the facts while conveying the associated viewpoints and emotions from each individual perspective.

In modern medicine nothing is ultimate and everything is evolving toward advanced goals that are in all likelihood unreachable but worth pursuing. What makes the world of vaccination so challenging is that healthy individuals, and invariably children, are the recipients of products that carry risks. Parents need to make decisions about their child’s welfare, but at what costs? Do parents, through their own actions, have the right to place others in their community at increased risk of infection? The scientific and public health sector also cannot blindly pursue an attitude of “We know best; trust us with your children.” Although Salk and Sabin were geniuses of their time and undisputedly saved many lives, they were both entrenched in their own beliefs, and this can ultimately be dangerous. The pharmaceutical industry also plays a major part in vaccine development and requires careful oversight at all turns. One of the heroes portrayed in Vaccine is Maurice Hilleman, who oversaw the development and introduction of a multitude of vaccines for Merck; and in focusing on his achievements, Allen highlights industry’s place in this process. Ultimately, education is the key, and this volume goes some way toward achieving that goal.

Allen also discusses the views of the nonbelievers, those individuals who deem the use of vaccines immoral or tarnished with deceit and corruption. As an HIV researcher, this reader found a striking parallel between these individuals as described by Allen and the AIDS denialists of today, who believe that HIV is a passenger virus and that AIDS is brought about through recreational drug use, malnourishment, or even the consumption of antiretroviral agents (1), while believers claim that HIV-1 causes AIDS (2). Scientific education must again be the key in allowing for sensible discussion from different sides of such debates. One powerful and chilling description in Vaccine relates to a conference presentation by Hilary Koprowski in 1951 during which he presented data on the trial of a new polio vaccine that had been grown in ground-up mouse brain and consumed by himself and children: “[The researchers] drank the gray-white sludge themselves, then fed it to 20 children . . .” This type of protocol is inconceivable today, yet still one wonders to what extent nonbelievers have the courage of their convictions, whether they would willingly subject themselves to HIV infection.

While we each fight in our individual corner, each bringing our different viewpoints to the table in the pursuit of the goal of safer vaccines, we should not forget that, to date, effective vaccines against the “big killers” (HIV, malaria, and TB) are not yet available. We need to learn from history what pitfalls may occur when such discoveries are made, but in the meantime I recommend you sit back and enjoy Vaccine.