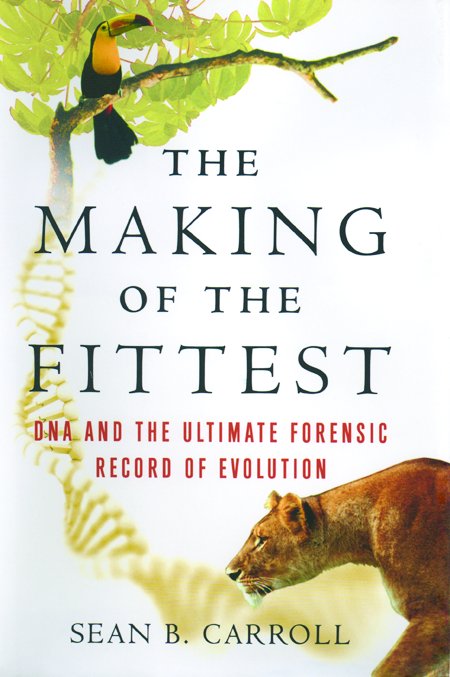 For the last century and a half, since the first printing of Darwin’s The origin of species, much of the best and most thought-provoking scientific writing has taken as its starting point some aspect of biological evolution. Given the high standards in this area, genuinely novel ideas or significant new data are necessary for an author to make a substantial contribution to this remarkable body of literature. Sean B. Carroll, professor of molecular biology and genetics at the University of Wisconsin and author of The making of the fittest, is fortunate to have both and to possess the ability as a writer to make effective use of these resources. From the relatively recent convergence of the fields of evolution and the molecular biology of development, new ideas have arisen regarding how the evolution of animal morphology is mediated at the level of gene regulation, and Carroll has played a leading role in the development of these ideas. In addition, in recent years there has been an explosion in DNA sequence data covering a remarkable range of different species, and this has shed new light on the molecular mechanisms underlying human and animal evolution. It is therefore a propitious time to be writing general interest books on evolution and Carroll has been quite active, producing three volumes in relatively quick succession.

Carroll’s two earlier books focus on the molecular biology of development and how this discipline informs our understanding of the mechanisms by which changes in morphological forms are produced during the course of evolution. Endless forms most beautiful (1) is aimed at the general interest reader but is slightly more challenging than the book currently under review. From DNA to diversity (2), which was cowritten with Scott Weatherbee and Jennifer Grenier, is aimed at the introductory graduate student or upper-level undergraduate and covers similar ground. These books present an introduction to one important aspect of current evolutionary science: the interplay between the molecular biology of development and the evolution of animal morphology. This field has generated many new insights into both developmental and evolutionary biology. In particular, Carroll describes the primary role that changes in gene regulation play in the evolution of animal form, as opposed to the more familiar emphasis on the evolution of protein structure and function. The author presents strong arguments for the relative stability of the sequence and function of most of the proteins, particularly transcription factors, that mediate the developmental sequence, while providing multiple examples of how the regulation of expression of these proteins is modified in a flexible manner over the course of evolution, resulting in dramatically different animal morphologies. The emphasis on the genetic components that are conserved during the course of evolution creates a strong thematic center for both books, making them considerably more coherent than typical developmental biology textbooks.

The making of the fittest is Carroll’s most accessible volume for the general reader. It covers similar conceptual and stylistic ground to some of Stephen Jay Gould’s popular works, but is firmly grounded in the molecular details of evolution, which were not generally available when Gould was writing. Carroll takes considerable advantage of results from the new science of genomics to illuminate a series of well-selected examples of evolution, primarily relating to animal morphology or physiology. Of particular interest is the genetic history of vision, a good example of how complex phylogenetic relationships and phenotypes can obscure relatively simple underlying molecular mechanisms. Most of the volume focuses on the centrality of DNA sequences to understanding the course of evolution and how natural selection acts to produce changes in those sequences. There is an emphasis on how the interaction between genetic variation and natural selection can have both generative and destructive effects on gene sequences and the consequences that this can have for the long-term survival of a given species. This book will be of interest to readers wishing to update their knowledge of the molecular mechanisms of evolution. It is sufficiently comprehensive to make a good introduction to evolution for the lay reader or nonspecialist and is highly recommended.

Throughout the book, Carroll provides a spirited defense of evolutionary theory, undercutting creationist and intelligent design theories with hard data, which makes the book a useful resource for anyone interested in this ongoing controversy. Carroll provides specific examples and arguments against some of the most common misconceptions regarding evolutionary theory. He also attempts to bring evolutionary theory into the mainstream of everyday thinking by showing that DNA technologies such as diagnostic and forensic testing technologies — with which much of the population has some familiarity, either directly or through the media — make little sense when taken out of the context of evolutionary theory, which underpins essentially all of modern biological thought.