In the 40 years since Harvard medical student Gilbert Omenn first described a rare, inherited disorder producing a paradoxical combination of immunodeficiency and immune dysregulation, the pathogenesis of Omenn syndrome (OS) has remained mysterious. In separate studies reported in this issue of the JCI, two mouse models bearing mutations in the V(D)J recombinase analogous to those causing human OS have been shown to recapitulate the disease and provide insight into the genesis of immunodeficiency combined with autoimmunity and atopy in OS and other disease settings (see the related articles beginning on pages 1260 and 1270).

Schematic for the development of immunodeficiency and allergy/autoimmunity in OS. 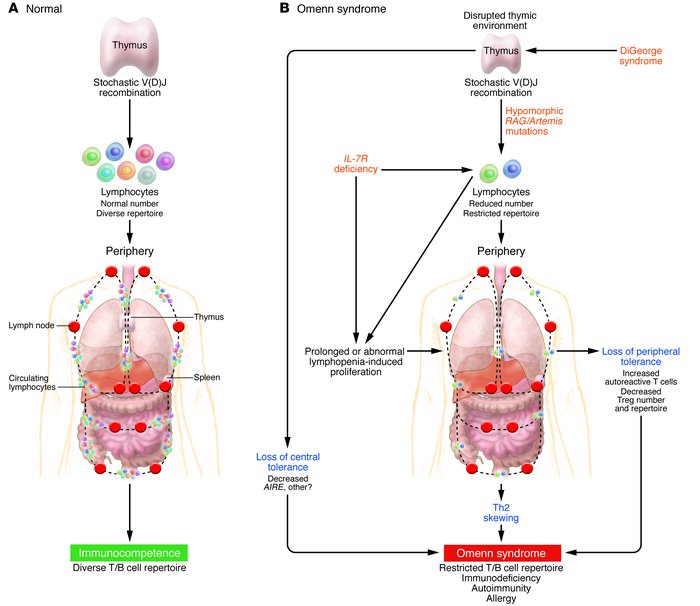 () Normally, V(D)J recombination is competent to produce a diverse repertoire of TCR molecules. In the thymus, normal selection processes are intact, and in the periphery, unimpeded lymphocyte development and handling of antigenic stimulation result in an immunocompetent individual. () In OS, genetic defects result in a restricted TCR repertoire and lymphopenia. A disrupted thymic environment, directly or indirectly caused by genetic defects, contributes to the loss of central tolerance. In the periphery, lymphopenia and () deficiency result in prolonged or abnormal homeostatic proliferation, which may result in Th2 skewing and loss of peripheral tolerance. In this issue of the , Khiong et al. () implicate homeostatically proliferating T cells as a cause of Th2 skewing in a mutant mouse model of OS. Also in this issue, Marella et al. () show that in a mutant mouse model of OS, there is a decreased proportion of Foxp3+ Tregs in peripheral lymphoid organs. Other factors, including genetic, epigenetic, environmental, and iatrogenic factors, may influence disease development at any or all stages. The involvement of a severely restricted B cell repertoire remains unexplained in OS and is not depicted here.