State of immunity: The politics of vaccination in twentieth-century America

Find articles by Hinman, A. in: JCI | PubMed | Google Scholar 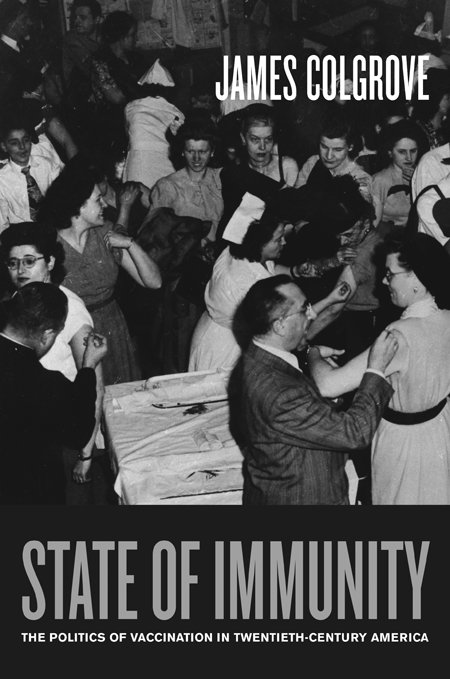 In State of immunity: the politics of vaccination in twentieth-century America, James Colgrove, an assistant professor at the Center for the History and Ethics of Public Health at Columbia University, addresses the ethical, political, and legal processes and controversies that surrounded vaccination in the US during the twentieth century.

Colgrove begins by describing the New York City smallpox epidemic of 1893–1894, during which tensions rose over issues such as quarantine and compulsory vaccination and there were professional and political debates about appropriate public health policies. A rise in antivaccination sentiment followed in the early years of the twentieth century accompanied by an increased public perception of adverse vaccination-related events (particularly in the absence of disease). In the 1930s, the power and the limits of persuasion (rather than compulsion) came to the fore in increasing use of the newly introduced diphtheria toxin–antitoxin mixture.

In the 1950s and 1960s, great drama was associated with the development of the polio vaccine. Celebrities such as Elvis Presley were enlisted as part of a sophisticated approach to promoting vaccination. At the same time, both scientific and public debates raged about the relative merits of the Salk inactivated polio vaccine (IPV, introduced in 1955) and the Sabin live attenuated oral polio vaccine (OPV, introduced in 1961) as well as the policy shift from the use of IPV to OPV. Complicating the situation was the 1955 “Cutter incident” in which Cutter Laboratories, one of several pharmaceutical companies licensed to produce IPV, unknowingly distributed inadequately inactivated doses of the vaccine, resulting in paralysis in 79 children who received the vaccine and in 135 of their family/community contacts. A second complication occurred with the recognition in the early 1960s that a small proportion of individuals who received OPV (or their close contacts) developed paralysis as a result of vaccination. The first problem was dealt with by modifying poliovirus inactivation procedures. The second issue resulted from an inherent characteristic of the vaccine and presented an ongoing challenge that was subsequently resolved in the US in 2000 by instituting the use of an enhanced IPV.

In the 1960s and 1970s, enthusiasm for disease eradication grew in the wake of dramatic declines in the incidence of measles and polio following introduction of their associated vaccines, and the World Health Assembly resolution committed to the global eradication of smallpox.

However, in the late 1970s, vaccination programs faced another problem as concerns were expressed about informed consent and liability for immunization-associated injuries. Immunization requirements for school attendance were emphasized as part of the 1977 national Childhood Immunization Initiative and were widely implemented.

The end of the twentieth century brought with it a measles resurgence during 1989–1991 and the resultant 1993 Childhood Immunization Initiative (CII). The CII was accompanied by an increase in funding for the Vaccination Assistance Act, which since 1964 had provided support to state and local health departments to provide vaccine and coordination, and enactment of the Vaccines For Children (VFC) program, an entitlement to free vaccines for uninsured, underinsured, Medicaid-eligible, and American Indian or Alaskan native children.

While well written, State of immunity is not a page-turner. The author focuses on controversies, not consensus, thus understating the broad support for immunization in the public and private medical sectors and the amazing public health benefits. This lack of perspective diminishes the overall utility of the book. A second criticism also relates to perspective, specifically the lack of depiction in the book of the magnitude of individuals or groups opposed to immunization compared with that of those who support current policies. For example, the Dissatisfied Parents Together group (a parent group questioning the value of immunization and opposing school immunization requirements) and the American Academy of Pediatrics (the professional association of pediatricians) receive essentially equal weight; the Association of American Physicians and Surgeons (a splinter group of private physicians opposed to third-party payments for medical care) and the rest of the medical community are given nearly equal weight.

Colgrove’s statement that “It is clear that whatever new vaccines might emerge in the coming years, a volatile mix of social, political, and legal factors will shape the deployment of those innovations” is correct. I only wish he had put more emphasis on the individual and societal benefits of immunization. School immunization requirements have been largely supported by the public and their elected officials and have been very effective in increasing immunization coverage and reducing disease incidence.

Overall, this is a useful reference for those involved in vaccine policy discussions and decisions. An important contribution of State of immunity is pointing out that current controversies surrounding vaccination are not new but represent the reemergence of questions, attitudes, and beliefs that have been with us since vaccination was first introduced. Recent controversy about efforts to mandate the vaccination of adolescent girls with the new human papillomavirus vaccine emphasizes the book’s relevance.