The strangest song: One father’s quest to help his daughter find her voice 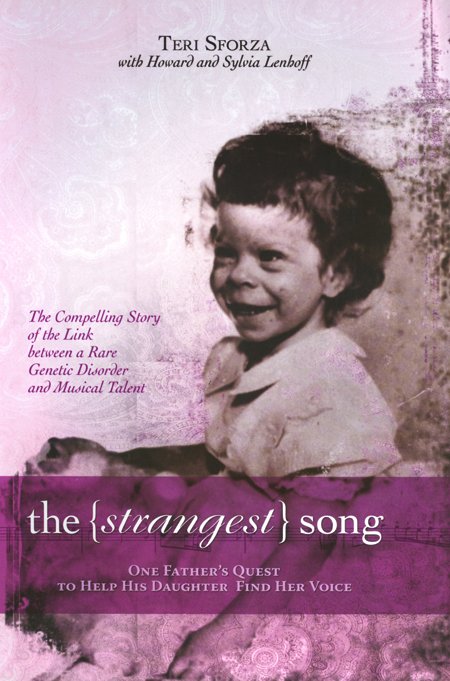 The high degree of interindividual variability in musical abilities and proclivities is not well understood. Indeed, the genetic, environmental, developmental, and neurocognitive substrates of musicality (itself a concept difficult to define operationally) remain quite obscure. That said, such differences are easily appreciated, in both senses of the word. On the other hand, the often obvious differences in cognitive abilities associated with neurodevelopmental disorders frequently have pernicious consequences for affected individuals and their families. In The strangest song: one father’s quest to help his daughter find her voice, Teri Sforza tells a story that melds different worlds of individual experience and social response — that of an extraordinarily musically talented, intellectually impaired woman with Williams syndrome (WS).

WS, a multisystem disorder occurring in about 1 in 7,500 live births, arises from hemizygous deletion of a 1.55-Mb region containing some 28 genes at chromosome 7q11.23. Physical manifestations include dysmorphic (“elfin”) facial features, supravalvular aortic stenosis and other connective tissue abnormalities, and growth retardation. Characteristic personality traits include hypersociability and heightened empathy (generally described as “delightful”), along with nonsocial anxieties. Developmental delay and cognitive impairment are the norm, with low IQ scores and severe deficits in spatial and arithmetic cognition and in conceptual reasoning. However, WS appears to be associated with relative preservation of abilities in language, face processing, sociability, and music.

This mix of cognitive abilities and disabilities has proven irresistible as a human model for examining the links among genes, neurodevelopment, cognition, and behavior. Defining the genetic substrates of WS-associated neurodevelopmental abnormalities has not been easy, in part because of the stereotypical nature of the responsible deletion. Study of atypical deletions as well as mouse models has, however, implicated several genes in various aspects of the neurocognitive and craniofacial phenotype, including GTF2IRD1 (a TFII-I transcription factor), CYLN2 (cytoplasmic linker protein 2), LIMK1 (LIM kinase 1), and FZD9 (frizzled 9). The fragmented nature of the WS cognitive phenotype — in particular, the lack of apparent difficulties with language despite evident severe impairment in other cognitive domains — has also provided considerable experimental grist for the mill of neuropsychological theory.

But WS is something experienced by individuals and those who care for and about them. To echo neurologist Oliver Sacks, WS is a “what” that happens to a “who.” And whatever the genetic substrates, the social environment is critical to how WS and other developmental disorders are experienced. These points are illuminated in a compelling way in The strangest song, an account of Gloria Lenhoff and her parents, written by Sforza with Gloria’s parents. Born before the syndrome was first described, Gloria had what was, in retrospect, a typically difficult childhood for someone with WS. Her likely future was one defined in large part by limitation of possibility and hope. However, Gloria’s parents’ recognition of, and delight in, her musical affinity and gifts, along with their single-minded pursuit of ways to develop and provide performing outlets for her musical talents, has led to what clearly seems to be a remarkably fulfilling life. Despite her varied intellectual limitations, Gloria turned into an accomplished lyric soprano (and accordionist) with a vast repertoire of songs in a profusion of languages who has enriched a broad public and herself with her gifts.

Of note, Gloria’s father’s activism was itself instrumental in spurring recognition and study of the WS musical phenotype. Compared with normal individuals, those with WS tend to exhibit more engagement with music — more emotion while listening to music, more time spent on musical activities, and onset of interest in music at a younger age. They also have a greater incidence of auditory anomalies, including hyperacusis, odynacusis, phonophobia, and auditory fascinations. Using functional MRI imaging, Levitin et al. have described possible neural correlates of this unusual auditory and musical sensitivity (1). Of course, as in the population at large, the actual musical abilities of individuals with WS (like their other cognitive abilities) vary widely. However, music appears to provide a uniquely important avenue for cognitive development and emotional fulfillment for many people with WS. The ongoing struggle by Gloria’s father and others to provide opportunities for such development and fulfillment drives much of the narrative of this book.

Sforza, neither professional scientist nor professional musician, has written an entertaining book for a general audience. Those looking for a state-of-the-art review of the science of WS will not find it here. Indeed, scientists will wince at the casual misinformation (e.g., Watson and Crick did not discover DNA). Similarly, musicians will stumble over occasional lapses in tone. But these are minor quibbles. Sforza beautifully limns the key role played by the social environment in the individual experience of genetic developmental disability, careful attention to which has the potential for helping people transcend biological and social categories in their own unique ways.