The colony The harrowing true story of the exiles of Molokai 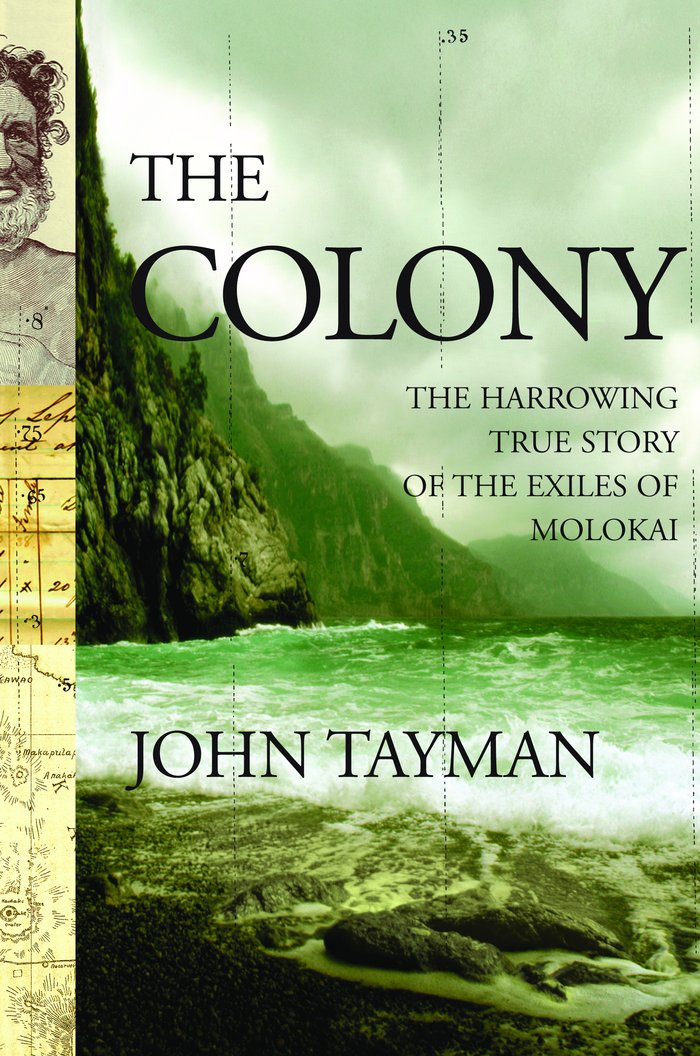 In the Hebrew Bible, it is written “As for the person with a leprous affection . . . that person shall dwell apart — in a dwelling outside the camp” (Leviticus 13:45–46). Most likely, biblical leprosy was not what we call leprosy today, but this passage reveals the early public health policy for the control of leprosy: segregation and stigmatization of patients with leprosy. The Hawaiian Board of Health used a similar strategy to control leprosy in the late 1800s. The colony: the harrowing true story of the exiles of Molokai by John Tayman tells the story of that strategy and its aftermath.

Beginning in 1866, the Hawaiian Board of Health completely separated patients with leprosy, both adults and children, from their families and exiled them to live in a settlement on Molokai called Kalaupapa. This site was chosen because it is surrounded by huge cliffs, making it relatively inaccessible from the rest of the island. The board was concerned about the finances of the settlement, so despite suffering from nerve deficits, limb deformities, and blindness, patients were expected to be self-sufficient — growing their own food and building and repairing their housing. Although segregation of patients was considered appropriate medical management at the time, the severity of the segregation and isolation, as well as the inhumane treatment of patients, made for a tragic story.

The book traces the history of leprosy from the mid-1850s to the present, with stories focusing on some of those affected by the disease as well as the great heroes who cared for them and championed their rights, including Father Damien, Mother Marianne Cope, and Lawrence Judd. There were villains, foremost among which was the Hawaiian Board of Health. Although patients in Carville, Louisiana, were being treated with sulfones in 1942, this breakthrough drug was withheld from the Kalaupapa patients for four years.

Given the compelling personal stories, it is not surprising that the book received high marks in other reviews. The book is compelling, but is it accurate? Though I have taken care of patients with Hansen disease (so named after the discoverer of the bacteria that causes leprosy) and researched the immunology of the disease for 25 years, I am not a historian. So on October 23, 2006, I visited Kalaupapa and met some of the 27 current patients, health care providers, National Park Service officers, and patient advocates. I contacted historians who understand Hawaiian culture and the history of Kalaupapa. The patients that have lived most of their lives on Kalaupapa are some of the most inspiring individuals I have ever met. Kalaupapa is an incredibly beautiful place. After my visit, I could only conclude that Tayman’s story is flawed and represents a further injustice to the patients of Kalaupapa and the natives of Hawaii.

The cover photograph Tayman has chosen is not of the cliffs of Molokai, but of a coastline in Italy. The first superintendent of Kalaupapa National Historical Park, Henry Law, discovered this discrepancy. He knew that the rocks in the picture were not volcanic rocks as found on Molokai (Figure 1) and found the website from which the picture was purchased, then flipped, stretched, cropped, and recolored. Anwei Law, a historian and exemplary patient advocate, has stated, “The cliffs of Molokai are very important to the people there. When things were bad, they would look at those cliffs and get strength from them. When you’ve changed that, you’ve missed something very significant” (1). Tayman has stated that “This is a representative cliff” (1). The paperback edition was released with a more appropriate photograph similar to what I saw on my visit (Figure 1).

The cliffs of Kalaupapa. The view is from Kalawao, the initial residential community for the patients, on the eastern side of the Kalaupapa peninsula.

The title itself raises concerns. The late Olivia Breitha, who was sent to Kalaupapa in 1937 at the age of 21, said, “It never was called the colony. It’s always been called ‘hospital’ and ‘settlement’” (1). Yet the author claims that he uses the word to avoid “historical revisionism”; there are only a very few instances in which the word “colony” is part of a direct quotation. On the other hand, Tayman uses the term “leper” frequently, claiming the necessity to do so, to avoid revisionism. A search of the text finds the term on 168 pages, sometimes more than once on a page. I have been taught by L.K. Bhutani that this term “smacks of contempt” and carries a great stigma and is therefore bitterly offensive to patients. Tayman’s repetition of the term has only succeeded in propagating its use and perpetuating the stigma.

The book begins with the story of Kaluaikoolau (known as Koolau), who had leprosy, his wife, Piilani, and their flight from the law and exile to Kalaupapa. According to Tayman, “Awaiting him there, was a life sentence of unspeakable horror.” The paragraph proceeds to recount in graphic detail the rumors about what happened to patients at Kalaupapa. Yet as Tayman writes, “What most disturbed the young couple, however, was that exile would mean the destruction of their family.” Well this is the point, and Tayman does not develop this part. Kalani Brady, a physician now caring for the patients at Kalaupapa, explained to me the powerful and important Hawaiian concept of “lokahi,” meaning “being together.” The book is disrespectful in failing to recognize something so vital to the Hawaiian culture. It is insulting to suggest that they were fearful of having the disease or having to live at Kalaupapa. What I learned is that the Hawaiian people were terrified and traumatized that outsiders would have the power to break up their families.

Several of the current patients have objected to the book, and Olivia Breitha commented to the New York Times, “It’s disgusting to me” (1). In visiting Kalaupapa, I could not get very exact answers as to why the patients strongly objected. Brady explains the concept of “na’au,” which is the center of a Hawaiian’s being, literally located in the gut. Hawaiians accept such feelings without substantiation. Another concept is “talk-story,” or “mo’olelo Kama’ilio,” one of the great traditions and experiences of Hawaii. It involves collaboration and corroboration, so to tell this story without the appropriate language or understanding of the Hawaiian people is an insult. Kerri A. Inglis, assistant professor of History at the University of Hawaii at Hilo, speaks of the sensational way in which this story is told. “I think it is actually part of a larger problem of the western/colonizer’s perspective of indigenous people, wherein indigenous peoples are stigmatized and stereo-typed” (personal communication). All of us — physicians, scientists, or laypeople — can learn from this the importance of understanding someone else’s cultural upbringing when delivering healthcare, studying disease, or interacting socially.

According to Tayman’s website, he has editorial experience working for several magazines, including Business 2.0, where he is listed with the nickname “Wheels” and is described as an automotive expert. I could not find any information about his qualifications as a historian or medical expert.

Harada told me that in 1945, “When I was told that I had leprosy, I thought I was going to be a zombie. I was 16 years old and all the comic books were about zombies. I didn’t know anything about leprosy.” But he wasn’t afraid of being sent to Kalaupapa, only that he might not see his family again. Paul has nerve damage in his hands from leprosy but says, “I am glad I didn’t have the benefit of antibiotics, because it helped me understand my destiny. Life could have been worse if I had a severely crippling disease like polio.” Makia Malo, diagnosed at age 12, said that he learned that “to separate us, they used the penal system. We got a lot and we lost a lot. Being away from family, you realize that life is passing you by. Someone else is making decisions for you.” Yet after antibiotic treatment, but now blind from the disease, Makia received his college degree from the University of Hawaii, where he was a role model for fellow students. He is an amazing storyteller, having performed throughout the world and produced two compact discs. Makia also started a scholarship to honor Kalaupapa through the Hawaii Community Foundation. The book ends with a vignette with Makia dreaming about being “swift and graceful and sighted.” Makia never had this dream, and from meeting him it is clear that he isn’t longing for a life with eyesight; he is empowered by his vision as a storyteller and by the inspiration he brings as a folk hero. There is more there than the “harrowing” story that Tayman tells. Once you understand the culture and character of these patients, you realize that they are the real heroes, and they are an inspiration to us all.