RNAi: a novel strategy for the treatment of prion diseases

RNAi: a novel strategy for the treatment of prion diseases

Prion disease refers to a group of fatal transmissible neurodegenerative diseases for which no pharmacological treatment is available. The cellular prion protein (PrPC) is required for both prion replication and pathogenesis, and reducing PrPC levels has been shown to extend survival time after prion infection. RNA interference (RNAi) is a sequence-specific posttranscriptional gene silencing mechanism. In this issue of the JCI, Pfeifer et al. report that lentivector-mediated RNAi significantly reduced neuronal PrPC expression; effectively suppressed accumulation of the infectious protease-resistant form of PrP (PrPSc) in a persistently infected neuroblastoma cell line; and markedly slowed the progression of prion disease in a unique chimeric mouse model (see the related article beginning on page 3204). These findings indicate that lentivector-mediated RNAi could, in principle, be developed for the therapy of prion disease.

RNAi and other strategies for prion disease treatment. 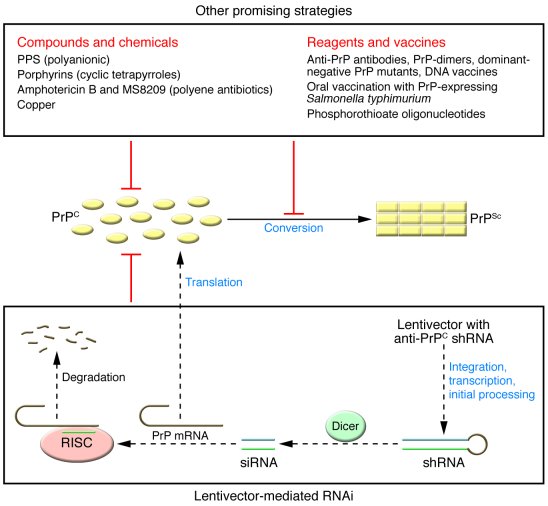 Monomeric PrPC (yellow ovals) converts into multimeric PrPSc (yellow rectangles) in the process of prion replication and prion pathogenesis. Reagents or strategies that effectively reduce the PrPC level or interfere with the PrPC-to-PrPSc conversion process have shown therapeutic potential for prion disease. In this issue of the , Pfeifer et al. () show that anti-PrPC shRNA carried on a lentivector is transfected into neuronal or ES cells, integrated into chromosomal DNA, and transcribed; anti-PrPC shRNA is released into the cytoplasm, where it is processed by endonuclease Dicer into siRNA. This in turn activates the RNA-induced silencing complex (RISC) to degrade PrP mRNAs, leading to reduced expression of PrPC and consequently diminished PrPSc accumulation and significantly improved survival time after prion infection. Other promising reagents and strategies are listed in the top box. Only the most effective and least toxic compounds or chemicals that have demonstrated therapeutic effects in animals after intracerebral prion inoculation are included; a few other reagents and vaccines that have potential but need further research are also listed (–).