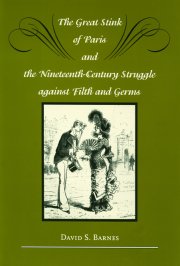 In August and September of 1880, all of Paris was suffused by an odor so putrid, so nauseating and fetid, that it sparked immediate fears of an epidemic, unfounded rumors of deaths throughout the city, bold citizens’ protests, and the formation of a government commission including the renowned Louis Pasteur. The great stink of Paris and the nineteenth-century struggle against filth and germs is David S. Barnes’s analysis of a seemingly minor event in which the intersection of the scientific, the political, and the cultural led to a revolution in the understanding of l’infection — both the disgusting odor and its feared capacity to cause disease.

Although the odor was never pinpointed as to source and was directly linked to no deaths, the consternation it generated caused the commission to repudiate a fundamental principle of germ theory — “Tout ce qui pue ne tue pas, et tout ce qui tue ne pue pas” (Not everything that stinks kills, and not everything that kills stinks) — by concluding that “these odors can pose a threat to the public health.” A central tenet of the book is that the great stink of 1880 catalyzed the “sanitary-bacteriological synthesis,” which blended the cultural association of cleanliness and morality with a scientific approach to contagion and infectious disease based on the isolation of the causative organisms. When another “stink” arose in Paris just 15 years later (1895), the incident was treated jocularly by the press and public, Barnes concludes, because of the triumph of the sanitary-bacteriological synthesis.

In tracing the decline of the miasmatists and the rise of the microbiologists, Barnes, an associate professor of History and Sociology of Science at the University of Pennsylvania, acquaints us with the mid-century precepts of reforming hygienists such as Louis-René Villermé, whose pioneering investigations “followed the worker from his workshop to his home . . . interrogating poverty without humiliating it,” and André-Justin Martin, the chief of the Paris disinfection crews in the 1890s, whose procedural manual forecasts what we read today: “Personnel must keep their fingernails short, their beards trimmed, and their hair close-cropped. They have at their disposal soaps for washing their faces and hands, special brushes for their teeth, and toothpaste. Every evening before changing clothes to go home, they must take a shower, during and after which they are required to wash with antiseptic solutions.”

Against the backdrop of the discovery of the typhoid bacillus by Eberth (1880), Roux’s development of diphtheria antitoxin (1884), and Pasteur’s rabies vaccine (1885), the number of voluntary disinfections of homes in Paris rose from 34,000 in 1893 to 64,000 in 1899, although deaths due to diphtheria and typhoid plateaued after an initial decline.

Barnes introduces us to pioneering educators such as Arthur Armaingaud, whose innovative series of public health lectures in Bordeaux in 1883, just two years after the establishment of mandatory public schooling, led to the development of a far-ranging hygiene curriculum that was well established in elementary and high schools by 1890. We meet the dégagé mayors of towns both large and small who scrawl “néant” (“nothing”) in their annual disease reports, as well as the far-sighted leaders of cities such as Lyon, who were the first to inaugurate a series of preventive measures that protected their citizenry from public health threats. Many members of this cast of characters reappear in chapters examining the taxonomy of transmission, the clash of disinfection and isolation policies, the contributions of educational programs, and the incorporation of the sanitary-bacteriological synthesis into governance, healthful architecture, and the replacement of Parisian cesspits with 600 kilometers of underground sewers. Primary documents such as letters, diaries, and committee reports attest to diligent scholarship. However, the unfolding of the book by theme rather than by chronological event often leaves the reader wondering whether one is back in the 1850s with Villermé or knocking at the door of the 20th century with Martin and his disinfection crews.

The triumph of public health in France lagged dramatically behind advances in Germany and Great Britain, and a chapter discussing the reasons underlying this disparity would have helped to broaden a somewhat parochial perspective. Experts in French cultural history and those who favor the microhistorical approach will place this book on the shelf, next to The great cat massacre: and other episodes in French cultural history (1). Perhaps the death of Albert, the prince consort, from typhoid fever in 1861 or the reforming novels of Dickens brought home to a shocked British public the leveling effect of infectious diseases and the need to ensure that all social classes were protected. As Dickens intones at the fevered death of the orphan Jo in Bleak House (1852–1853) (2), “Dead, your Majesty. Dead, my lords and gentlemen. Dead, Right Reverends and Wrong Reverends of every order. Dead, men and women, born with Heavenly compassion in your hearts. And dying thus around us every day.” Indeed, the margin that separates rich and poor is no bigger than a microbe.