Drugs known as beta blockers, which antagonize the β-adrenergic receptor (β-AR), are an important component of the treatment regimen for chronic heart failure (HF). However, a significant body of evidence indicates that genetic heterogeneity at the level of the β1-AR may be a factor in explaining the variable responses of HF patients to beta blockade. In this issue of the JCI, Rochais et al. describe how a single amino acid change in β1-AR alters its structural conformation and improves its functional response to carvedilol, a beta blocker currently used in the treatment of HF (see the related article beginning on page 229). This may explain why some HF patients have better responses not only to carvedilol but to certain other beta blockers as well. The data greatly enhance our mechanistic understanding of myocardial adrenergic signaling and support the development of “tailored” or “personalized” medicine, in which specific therapies could be prescribed based on a patient’s genotype.

The effect of the β1-AR Gly389Arg polymorphism on signal transduction and beta blockade by carvedilol. 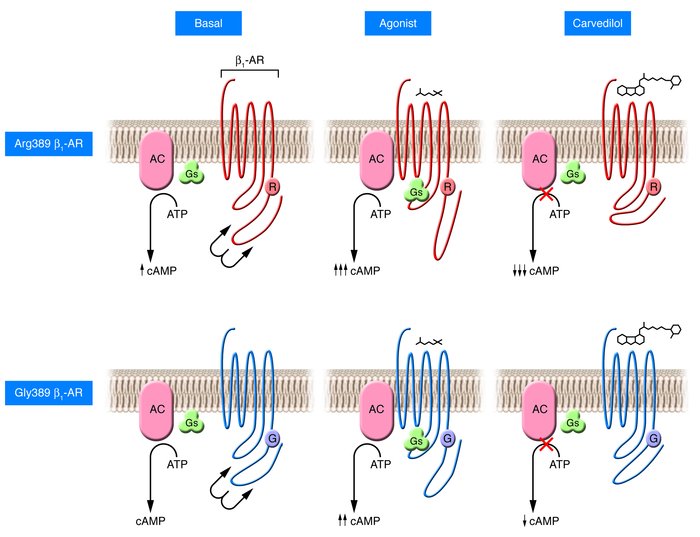 The Gly389Arg polymorphism of the β1-AR occurs in the region between the seventh transmembrane domain and the intracellular tail of the receptor (R and G correspond to arginine and glycine, respectively, at position 389 of the receptor). This highly conserved region is putatively associated with coupling to the Gs protein. The change of the amino acid residue at position 389 of the β1-AR from the polar, basic arginine (upper 3 panels) to the small, nonpolar glycine (lower 3 panels) may result in a modified structure that could alter receptor-Gs interaction. This region of the cytoplasmic tail of the receptor may participate in regulating the affinity of the receptor-Gs interaction. This could potentially explain the differences in receptor-Gs coupling and cAMP production associated with the Arg389 β1-AR variant as compared with the Gly389 β1-AR variant reported previously (7, 8). Under basal conditions, the Arg389 variant has been associated with increased cAMP production, which is markedly augmented as compared with the Gly389 variant following agonist stimulation (). This effect could also be attributed to a more favorable structural environment for interaction with Gs. Carvedilol treatment induces a conformational change resulting in the intracellular tail of the receptor being positioned more closely to the third intracellular loop; this inverse agonism of the receptor in theory would lead to decreased Gs coupling and reduced cAMP accumulation. Both variants demonstrated inverse agonist properties in response to carvedilol; however, the effect was increased 2.5-fold in the Arg389 variant, apparently due to conformation of the Arg389 structure in the presence of the ligand as observed by Rochais et al. in this issue of the ().