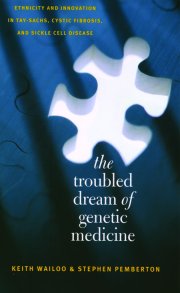 The major scientific advance of the late 20th and early 21st centuries was the determination of the sequence of the entire human genome and, in turn, the repertoire of human genes. As part of the Human Genome Project, a program was established to study the ethical, legal, and social issues (ELSI) surrounding the availability of genetic information. The troubled dream of genetic medicine grew out of an extended collaboration between the authors, Keith Wailoo and Stephen Pemberton, originally for an ELSI-funded project about gene therapy. The authors came to appreciate the troubled history of gene therapy, a proposed panacea of much hype and few successful therapeutic developments. Wailoo received funding to “expand the scope of the work, by fitting the stories of cystic fibrosis, Tay-Sachs, and sickle cell disease into the broader context of racial politics, pain, and the politics of biomedicine in twentieth-century America.” As a result, they dreamt up a hodgepodge of a book that unfairly brands a small, but important, medical specialty. Is genetic medicine a “troubled dream”?

During the last 50 years, genetic medicine developed as a specialty. Indeed, The metabolic and molecular bases of inherited disease (1), first published in 1956, defined the practice of the field. The editors and contributing authors’ approaches were reductionistic, methodical, and novel, often requiring patients or their advocates to make decisions about experimental therapies or reproductive choices. This resulted in a less paternalistic, more participatory physician-patient relationship that has since permeated most aspects of medicine.

The field was also fueled by the discovery of genes and genetic disorders (catalogued in the database Online Mendelian Inheritance in Man; http://www.ncbi.nlm.nih.gov/entrez/query.fcgi?db=OMIM), which has occurred at an exponential pace due to advancements in scientific methodology. Consumers became a driving force behind genetic research, funding efforts to develop diagnostic methods, treatments, and cures.

Medical genetics became not only a diagnostic and therapeutic specialty, but also a preventive strategy. The possibility of preventing mental retardation in children by early intervention was apparent in the mid-1960s and led to the establishment of newborn screening programs, initially for phenylketonuria, but subsequently for other conditions, including sickle cell disease and cystic fibrosis — although this is not discussed by Wailoo and Pemberton. Reproductive genetic screening followed soon thereafter, so that by the early 1970s, amniocentesis to test for chromosomal and biochemical disorders gained a foothold. The newly created profession of genetic counseling, providing education and guidance related to the conditions for which testing was offered, extended the range of medical genetics. In the same era, the first Tay-Sachs screening programs were implemented. The National Academy of Sciences appreciated the importance of this emerging field of genetic screening and commissioned an expert panel that provided a canon for performing genetic screening. As testing for other conditions became available, medical geneticists, pediatricians, and obstetricians grappled with whether these ought to become part of panels of routine screening tests.

The “failures” that Wailoo and Pemberton discuss are new treatments for cystic fibrosis and sickle cell disease, including gene therapy, heart-lung transplantation, bone marrow transplantation, and drug (specifically urea and hydroxyurea) therapies. The documentation of the failure of gene therapy trials is the true strength of the book (2). Organ and bone marrow transplantation and hydroxyurea treatment have been shown to be effective — although transplants are expensive, risky, and limited by donor availability. In general, drug therapies are expensive to develop, and the failure rate is high; however, high cost is not the rule. Some treatments, such as nighttime feeding for medium-chain acyl-CoA dehydrogenase deficiency and penicillin for sickle cell disease, have been remarkably effective and cheap.

The authors’ comments about racial politics are unsubstantiated and verge on being calumnious. Most notable are their comments about the Dor Yesharim program, established to prevent autosomal recessive genetic conditions in the ultra-Orthodox Jewish population. The program tests potential couples prior to matchmaking to determine whether both are carriers for an autosomal recessive condition, in which case they are urged not to marry. They do not learn of the condition for which they are a carrier and thus are not branded or stigmatized. This program has tested over 150,000 people and has been instrumental in introducing screening tests. It is most certainly not a “nightmare,” as Wailoo and Pemberton call it.

So genetic medicine is not a “troubled dream” but rather an active medical specialty that provides care to millions across the globe. It has had its therapeutic triumphs and failures — much like any other specialty in medicine.