Find articles by Barrett, A. in: JCI | PubMed | Google Scholar 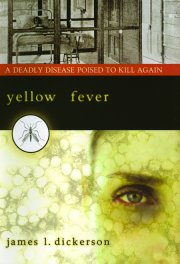 Yellow fever has played a central role in the history of infectious diseases. It was the first disease to be demonstrated to be transmitted by an arthropod, one of the first diseases to be shown to be caused by a virus, and one of the first infectious agents to be controlled by development of a live vaccine. In his book, Yellow fever: a deadly disease poised to kill again, James Dickerson describes the history of yellow fever from 1793 onward and presents arguments that the yellow fever virus will return to the United States in the near future. Dickerson is a journalist who has written several nonfiction books and a large number of health-related articles for various magazines. There is no doubt that his skills as a journalist make this book a good read for a nonscientific audience. However, I believe that with some extra research, the book could have been of more interest for the scientific audience as well.

The book is divided into eight chapters. The first four chapters deal with the history of the disease in the United States, focusing on Philadelphia, New Orleans, Memphis, and Mississippi. Although interesting, as a scientist I thought these chapters placed too much emphasis on sociopolitical issues of the times at the expense of information about the disease. This was particularly disappointing, as the history of yellow fever is so rich in stories related to the devastating effects of the disease in Africa, Europe, and the Americas.

Chapter five gives a good overview of the period around the Spanish-American War, when large numbers of American troops stationed in Cuba succumbed to the disease and the critical discovery was made that the virus was transmitted by mosquitoes. The author provides an excellent description of the enormous contributions of Carlos Finlay, Walter Reed, William Gorgas, and others, illustrating for the reader how the disease is spread and how public health measures can be used to control a mosquito-borne disease. It is surprising that Max Theiler, who won a Nobel Prize for his work on the disease and the development of the 17D live vaccine, only receives mention in two pages of the book. The development of the French and American vaccines was a milestone in the history and control of yellow fever.

Chapter six describes research on weapons of mass destruction and provides extensive information on the potential use of a variety of infectious agents as biological weapons. Only a small portion of the chapter is devoted to yellow fever, and I believe that Dickerson’s arguments that the virus could be used as a biological weapon are not scientifically strong given the biological properties of the yellow fever virus.

The last two chapters focus on global warming, the identification of yellow fever as a reemerging disease, and predictions for the future. The chapter on global warming and its effects on infectious diseases — particularly those caused by mosquito-borne viruses — is very interesting, and Dickerson makes comparisons among yellow fever, West Nile, and dengue viruses. The last chapter, entitled “The disease that won’t go away,” informs readers of the state of yellow fever in the twenty-first century. It describes the increasing number of cases in areas of Africa and South America, where the virus is endemic, as well as the very sad situations of tourists who, without the proper immunization, are infected while visiting such areas. It is tragic that these cases still occur when we have a very effective vaccine to prevent the disease. In both chapters the author cites a number of quotes from Ned Hayes, a physician-scientist at the U.S. Centers for Disease Control and Prevention. These matter-of-fact quotes provide a very accurate representation of the risk of yellow fever at the present time.

Overall, this book includes something for everyone but, alas, it does not cover everything that I would expect from a book devoted to yellow fever, and so I cannot recommend it highly. Dickerson has made minimal use of the scientific literature, where there are some excellent reviews on the history of yellow fever that would have helped to improve the book (1). Still, there are a number of sections that will be of interest to physicians and scientists. One of the most illuminating comments concerns the need for American physicians to be better educated about yellow fever. I wonder how many physicians today could diagnose a yellow fever case if they saw one. I suspect it would be very few.

The last paragraph of the book jacket says it is not a matter of if, but when yellow fever will return to the United States. I believe that this claim is exaggerated . . . but then who in August 1999 would have predicted West Nile virus would emerge in New York? We will have to wait and see.