Pneumonia before antibiotics Therapeutic evolution and evaluation in twentieth-century America

Find articles by Ratner, A. in: JCI | PubMed | Google Scholar 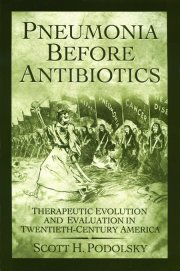 Streptococcus pneumoniae (the pneumococcus) was first isolated by Pasteur and Sternberg in 1880 and shortly thereafter was recognized as the most common cause of bacterial pneumonia. Between then and now, the implication of a diagnosis of pneumococcal pneumonia has undergone a monumental change in the minds of physicians. In the early 20th century, when William Osler gave pneumonia its oft-cited appellation “captain of the men of death,” its case fatality rate was estimated to be between 30% and 40%. The subsequent decades saw a gathering storm of interest in the biology and treatment of pneumococcal infection. Neufeld and Haendel demonstrated that pneumococci could be divided into immunologic types, later distinguishable in a matter of hours in a clinical specimen. In the 1930s, sulfonamide therapy for pneumonia reduced the case fatality rate substantially, and with the introduction of penicillin, the respect and fear accorded to pneumonia among physicians was diminished (perhaps to the point of excess), the focus shifting to strategies for prevention of pneumococcal disease by vaccination.

Scott Podolsky, an internist and lecturer in the Department of Social Medicine at Harvard Medical School, focuses on a sometimes untold story in the evolution of therapy for pneumococcal pneumonia, the development and implementation of type-specific serum therapy. Serum therapy, when it is discussed, is often presented as a footnote in this historical parade, a brief stop between the hopelessness of Osler’s time and the triumph of the antibiotic era. Podolsky tells a story that is much richer, full of scientific and medical giants, such as Oswald Avery, Rufus Cole, and Maxwell Finland. Before the coming of the antibiotic era, which marks the end of the narrative, a massive public health system will have been mobilized and subsequently dismantled, pharmaceutical companies will have devoted massive resources to serum production, and debates will have simmered throughout the medical community as to how and when serum might best be used.

The three parts of the book trace the development, wide implementation, and subsequent decline of serotherapy over a period of more than 40 years. Podolsky is at his best when he illustrates the many instances in which debates over serotherapy foreshadowed questions that the medical community continues to face today. The role of the public health system vis-à-vis local practitioners was hotly debated, with individual doctors resentful of intrusions into their practices. Serious concerns were raised about the role of pharmaceutical companies in the investigation, marketing, and distribution of a product (serum) from which they profited. Finally, students of clinical investigation will recognize the seeds of controlled trials in this book, with disagreements over the proper handling of control groups, the need to convince practitioners of the value of statistical analysis, and the generalizability of studies performed at academic centers to the “real world.”

As an additional parallel to today, it is striking in the telling of this story how consistently medicine has underestimated the diversity and adaptability of the pneumococcus. As the number of known serotypes expanded from 2 to 4 to more than 30 (of the 90 that are currently recognized), there was the gradual realization that type-specific therapy would become logistically challenging. Likewise, antibiotics such as penicillin, hailed as the final blow against the pneumococcus, would prove ultimately to select antibiotic-resistant mutants. Today, we face similar issues as we use polysaccharide vaccines against a limited number of serotypes, a strategy that ultimately may require revision or addition of serotypes currently not represented in the vaccine.

It is somewhat unfortunate that, despite the timeliness of this book, it is written in large part in a manner not easily accessible to the general reader. A great deal of the text is devoted to specific local reactions to larger scale policies. The writing is turgid, and much of the story resides in the voluminous footnotes, which constitute roughly 40% of the book’s length. The result is a volume that is likely to be of greater interest to medical historians and sociologists than to clinicians or basic scientists.