The glomerular capillaries function as the filtration barrier that retains albumin and other plasma proteins in the circulation. The unresolved question that has been asked for more than 50 years is, Which structural component of these capillaries constitutes the main molecular sieve that normally retains albumin and allows its passage in diseases associated with proteinuria? There is considerable evidence implicating both the glomerular basement membrane (GBM) and the epithelial filtration slits as the barrier. However, the prevailing point of view at present is that the slit diaphragms bridging the filtration slits are responsible for this important function, and evidence implicating the GBM is largely ignored or forgotten. In this issue of the JCI, Jarad et al. show that in laminin β2–deficient (Lamb2–/–) mice, proteinuria can be directly attributed to the altered composition of the GBM (see the related article beginning on page 2272). Changes in the permeability of the GBM and its organization were primary to changes in the epithelium, as they preceded foot process effacement and loss of slit diaphragms. 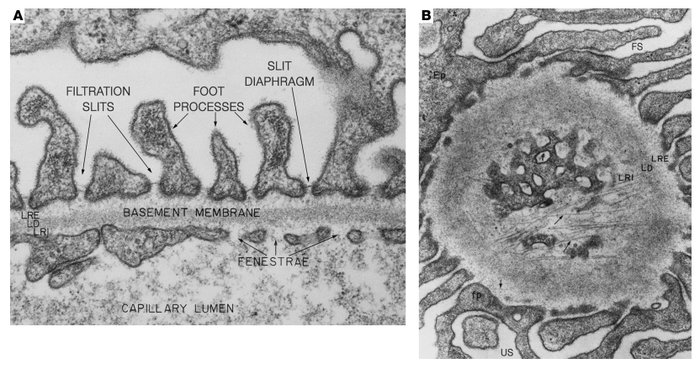 () The filtration surface consists of the endothelium, which is interrupted by fenestrae; the GBM; and the epithelial foot processes. The latter are attached to one another at their base by slit diaphragms. Note that the endothelial fenestrae are open and the GBM is directly exposed to the blood plasma. The GBM consists of 3 layers: the lamina densa and 2 lighter regions known as the lamina rara interna and lamina rara externa on either side. The lamina densa is composed of a fine (~3-nm) filamentous meshwork, which also extends across the lamina rara from the lamina densa to the endothelium and foot processes of the epithelium. Magnification, ×50,000. Figure reproduced with permission from Lippincott Williams & Wilkins (). () Glomerular capillary wall cut in grazing section. In this EM view, the endothelial fenestrae (F) appear as open portholes, and the 3 layers of the GBM are cut broadly. The fine fibrils of the lamina densa meshwork extend across the lamina rara externa to the base of the podocytes’ foot processes (fp, short arrow), and larger (10-nm) fibrils (long arrows) are located between the endothelium and GBM. The epithelial (Ep) filtration slits (FS) are also cut in grazing section, and the slit membranes are not detectable in this plane of section. Magnification, ×40,000. US, urinary space. Figure reproduced with permission from Plenum Press ().