Power, sex, suicide Mitochondria and the meaning of life 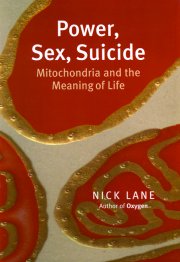 To the typical reader of the JCI, the word mitochondria likely evokes a Pavlovian response remembered vaguely from biochemistry class: they are “the powerhouses of the cell.” However, as implied by the title of this most thought-provoking book, Nick Lane goes to great lengths to remind us that they are much more than that.

In seven broad sections, Lane takes us on a three-billion-year tour of the organelle, starting with the evolutionary origins of mitochondria, proceeding to their role in oxidative energy metabolism as well as their necessity for the development of complex multicellular organisms and - more provocatively - of sex, and ending with the recent discovery of their role in apoptosis and its implication for aging.

Lane clearly loves this organelle, but unlike people who study mitochondria for a living, he has few axes to grind. This is not to say that Lane has no opinions (quite the contrary, the book is full of them), but those he has do not seem to be based on any particular bias a priori. Rather, Lane sets forth what we currently know about mitochondria - and his knowledge of the field is truly impressive, as he surveys major trends in evolutionary biology, cell biology, population biology and genetics, bioenergetics, power-law theory, and complexity, to name but a few of the fields covered - and then follows the data to likely logical conclusions. Where data are not available, he speculates freely, but also within the bounds of reason. Almost every area of mitochondrial biology is contentious, and it would be easy to be put off by Lane's self-assurance and his often purple prose, but, strange to say, I was not, even though I took exception to some of his conclusions.

Of the seven sections in the book, I found the first and the last to be the most fun to read, as Lane provides his own spin on where mitochondria came from and where they are taking us. The prokaryotic origin of “endosymbiotic” mitochondria is now beyond debate, but how it happened has been contentious. Lane champions the “hydrogen hypothesis,” in which a mutual relationship developed between two prokaryotes (one excreting H2 and CO2, and the other consuming them) that merged to ultimately become the ancestral eukaryote, a pairing so unlikely that Lane believes it happened only once on planet Earth and that its rarity may make multicellular life practically impossible elsewhere in the universe. I have enough arrogance to agree with the former, but enough humility to reject the latter.

The chapters on apoptosis and aging that close the book are not only similarly thought-provoking, they should be required reading for workers in the field. Lane is particularly skeptical of the much-ballyhooed “free radical theory” of aging and makes the cogent point that free radicals not only need not be harmful, but may be absolutely beneficial. His discussion of aging in short-lived rodents as compared to long-lived birds, with its emphasis on the rate of free radical leakage through the respiratory chain, the detection of those free radicals, and the relative amount of “spare capacity” (that is, excess mitochondria) required for peak loads (for example, while flying), puts the aging problem into a perspective rarely seen in print.

I found the chapters on sex and maternal (more properly, uniparental) inheritance the least persuasive. Lane argues that the “primordial” mitochondrial apoptotic machinery was the engine driving the origin of sex: in a damaged cell, selfish mitochondria could preserve themselves by encouraging the cell to fuse with an undamaged cell, thereby providing the mitochondria with a new cytoplasm with a more favorable redox environment, while at the same time recombination among the two nuclear genomes could repair the genetic causes of the initial damage. To limit the promiscuity of such an arrangement, this type of cell fusion was sequestered in the gametes and became the origin of sex. While Lane acknowledges the advantages of recombination to mask deleterious nuclear alleles, such an advantage would seem sufficiently powerful to evolve even in the absence of a mitochondrial raison d'etre. Moreover, rather than being a solution to the problem of “conflict” between male and female mitochondrial DNAs, uniparental inheritance can be viewed more simply as a way to prevent the spread throughout a population of deleterious mutations that manifest a phenotype only when present above a relatively high threshold of mutant mtDNAs, so that an isolated maternal lineage, but not the population, is eliminated once that threshold is exceeded.

Lane is not particularly interested in the nuts and bolts of what mitochondria do; rather, he delves into the bigger questions of how mitochondria arose and why we eukaryotes, as “composite” organisms with the dual genetic heritages of mitochondrial and nuclear DNA, have come to be what we are. Surely that is a story worth telling. In Lane's hands, it is also one well worth reading. Ignore the ugly cover and buy the book.