IL-23 induces the differentiation of naive CD4+ T cells into highly pathogenic helper T cells (Th17/ThIL-17) that produce IL-17, IL-17F, IL-6, and TNF-α, but not IFN-γ and IL-4. Two studies in this issue of the JCI demonstrate that blocking IL-23 or its downstream factors IL-17 and IL-6, but not the IL-12/IFN-γ pathways, can significantly suppress disease development in animal models of inflammatory bowel disease and MS (see the related articles beginning on pages 1310 and 1317). These studies suggest that the IL-23/IL-17 pathway may be a novel therapeutic target for the treatment of chronic inflammatory diseases. 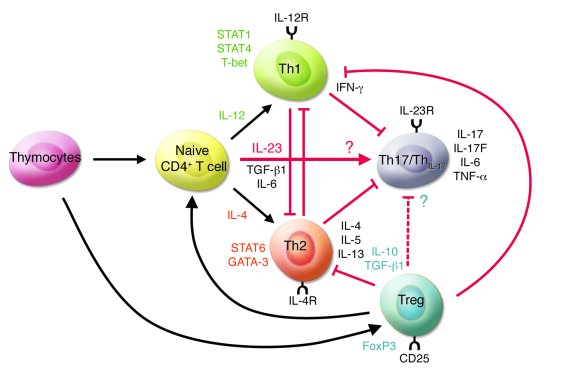