A new cardiac MASTer switch for the renin-angiotensin system

A new cardiac MASTer switch for the renin-angiotensin system

The aspartyl protease renin was first isolated from the kidney by Tigerstedt more than a century ago. In the kidney, renin secretion is tightly linked to sodium intake and renal perfusion pressure, reflecting the important role of the renin-angiotensin system (RAS) in controlling body fluid volume and blood pressure. The study by Mackins et al. in this issue of the JCI describes a novel source of renin: the mast cell (see the related article beginning on page 1063). This discovery suggests a distinct pathway for activation of the RAS that may have a particular impact on the pathogenesis of chronic tissue injury as well as more acute pathology such as arrhythmias in the heart.

Production of renin by cardiac mast cells represents a novel mechanism for regulating the RAS. 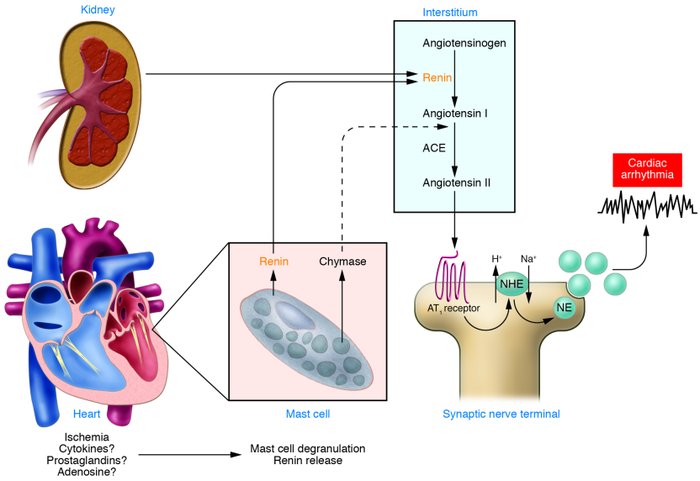 In this issue of the , Mackins, Levi, and associates show that ischemia of the heart triggers renin release by cardiac mast cells, resulting in activation of the RAS (). The consequent production of angiotensin II stimulates angiotensin II receptor, type 1 (AT1) in sympathetic nerve terminals, causing release of norepinephrine (NE) and generation of cardiac arrhythmias. These studies indicate that resident mast cells in the heart and perhaps other organs, upon appropriate stimulation, are capable of producing ample quantities of renin to activate the RAS locally and thereby modulate organ function. This pathway is likely to be regulated by factors linked to inflammation and injury that are quite different from those controlling renin release at the JG apparatus of the kidney. NHE, Na+/H+ exchanger.