Childhood lead poisoning: the torturous path from science to policy

Childhood lead poisoning: the torturous path from science to policy

The long history of lead poisoning provides many lessons about the process by which scientific knowledge is translated into public health policy. In the United States, lead was added to paint and to gasoline in enormous quantities long after medical evidence clearly showed that excessive lead exposure caused considerable morbidity in the population. This article discusses some of the factors that contributed to the slow pace of efforts to address this problem, including the ubiquity and magnitude of lead exposure during much of the twentieth century, which produced a distorted notion about the blood lead level that can be considered “normal”; the prevailing model of disease during this period, notably the novelty of the concept of subclinical disease; the fact that childhood lead poisoning affected mostly families that were politically and economically disenfranchised, fostering a “blame the victim” attitude; and that controlling lead exposure would have impeded efforts to achieve other desirable goals, illustrating the role that value trade-offs often play in policy decisions.

Parallel decreases in average blood lead levels and the amount of lead used in gasoline during 1976–1980 were observed in the National Health and Nutrition Examination Survey II (NHANES II). 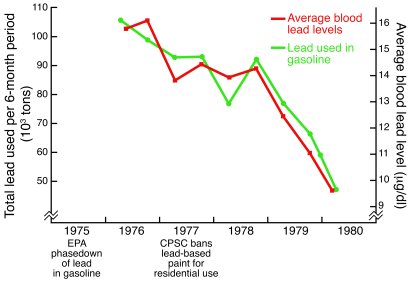 This followed the 1975 ruling of the Environmental Protection Agency to phasedown the use of lead in gasoline in the United States, which was completed in 1991. Also, in 1977 the U.S. Consumer Product Safety Commission (CPSC) ruled that paint intended for residential use could not contain more than 0.06% lead by dry weight. Figure modified with permission from ().