Sepsis and sepsis syndrome are leading causes of mortality throughout the world. It is widely held that sepsis represents a dysregulated innate immune response to an offending pathogen. This immune response is often initiated via microbial products signaling through TLRs expressed on host immune cells. There is increasing evidence that this innate response can be dramatically influenced by the cellular redox state, and thus a better understanding of oxidative regulation of innate immunity could lead to new treatments for sepsis. In this issue of the JCI, Thimmulappa et al. show that nuclear factor-erythroid 2–related factor 2 (Nrf2), a member of the “cap’n’collar” family of basic region–leucine zipper transcription factors, which has previously been shown to be involved in the transcription of antioxidant gene expression in response to xenobiotic stress, is also a critical regulator of cellular oxidative stress in sepsis (see the related article beginning on page 984).

A schematic representation of ROS- and TLR-mediated gene expression. 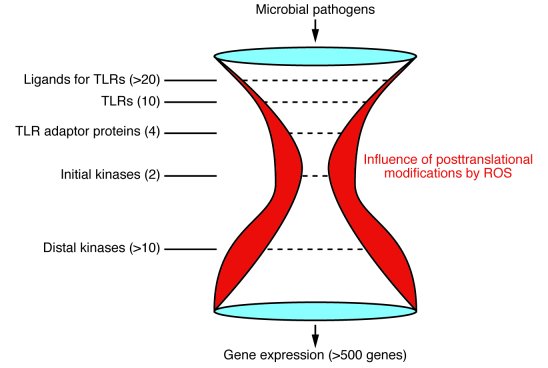 Despite the diversity of microbes that are potential pathogens, there is precise molecular recognition of microbial products by molecules of the innate immune system, with the TLR family being 1 of the most intensely studied mediators of this recognition. There are 10 human TLRs that signal via 4 adaptor proteins and 2 initial kinases; this signaling is followed by the activation of distal kinases that subsequently regulate transcription factors such as NF-κB and activator protein 1 (AP-1), which control gene expression. Although the signaling cascade is quite narrow at its center, posttranslational modifications of kinase activity by ROS likely contribute to the diversity and intensity of gene expression after microbial activation of the innate immune system.