A unique role for Stat5 in recovery from acute anemia

A unique role for Stat5 in recovery from acute anemia

The precise role of erythropoietin receptor–activated (EpoR-activated) Stat5 in the regulation of erythropoiesis remains unclear. In this issue of the JCI, Menon and colleagues present new experimental data that indicate a distinct role for Stat5 in the regulation of stress-induced erythropoiesis, such as during acute anemic states (see the related article beginning on page 683). A critical function for Stat5 is to promote cell survival, possibly through transcriptional induction of the antiapoptotic protein Bcl-x. In the present experimental system, erythropoietin-Stat5 signals did not induce Bcl-x expression but did induce oncostatin-M. Moreover, oncostatin-M was found to enhance survival of erythroid progenitors. This work differentiates between steady-state (or homeostatic) erythropoiesis and stress-induced erythropoiesis at the level of EpoR signaling. 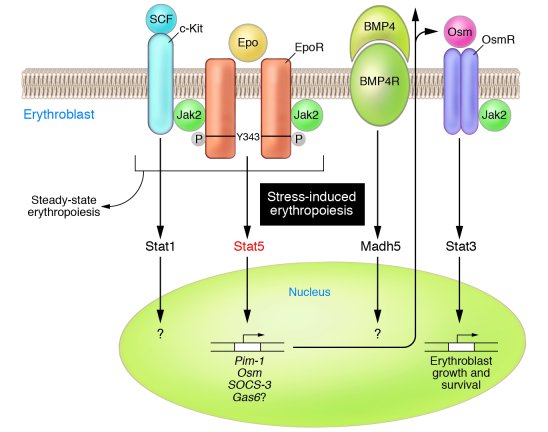