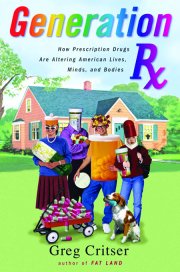 According to Greg Critser’s new book, Generation Rx, in 1993, the average annual number of prescriptions per person in the US was seven; by 2004, it had grown to 12. Subtitled How prescription drugs are altering American lives, minds, and bodies, Critser’s book outlines the growth of the pharmaceutical industry and the general willingness of the public to accept (even demand) prescription medications for themselves and their children.

In the first half of the book, Critser, a freelance journalist who has written extensively on nutrition, health, and medical issues, tackles the recent history of the pharmaceutical industry in the US, starting with the push for deregulation that began during the Nixon administration and continued into the Reagan years. He provides a chronological account of industry changes, beginning with drug patent restoration and moving on to the circumstances that led to acceleration of the FDA approval process and revamping of the industry’s corporate structure. Critser speaks like an insider and seems to have directly interviewed many of the key figures. Using examples of drugs familiar to all clinicians, he illustrates the fine line between treating illness and making a buck.

Critser is at his best describing the shift in ideology that led to widespread use of direct-to-consumer (DTC) advertising, a concept that even industry representatives initially thought would damage doctor-patient relationships. He illustrates the power of DTC advertising through a description of the launch of Seldane (terfenadine) in 1988 when, despite an FDA moratorium, the manufacturer developed a successful campaign, not by advertising how the drug worked, but by focusing on what it did not do — cause drowsiness — compared with older drugs. This set the precedent for future DTC approaches. Critser goes on to outline the struggles between industry and the FDA about off-label uses, the shift to more subjective end points in clinical trials, the promotion of drugs for rare diseases that can be perceived as common (e.g., Paxil for social anxiety disorder, which is converted in consumers’ minds to shyness), and the industry’s promotion of “lifestyle” rather than drug therapy.

Although heavily critical of industry, Critser does not presume that the public is innocent. In the second half of the book, he describes the three “pharmaceutical tribes” of the American public. The first is the “tribe of high performance youth,” a group he defines by the growth of Ritalin (methylphenidate) therapy for attention deficit hyperactivity disorder (ADHD) and the increasing frequency of use of Ritalin and antidepressants on college campuses. The second is the “tribe of middle years,” which Critser characterizes with stories of high rates of opioid use among professionals and the growth of Provigil (modafinil) from a drug to treat narcolepsy to one approved to treat “work shift sleep disorder,” which led to widespread off-label use for general sleepiness in overworked middle-aged adults. His final tribe is the “superseniors — tribe of high performance aging,” illustrated by our society’s preoccupation with preserving health, virility, and cognition beyond what was expected in previous generations.

The book is written in an accessible style directed at the general public. Clinicians reading it will be frustrated at times by subtle inaccuracies created by Critser’s simplification for lay readers. They also may object to the somewhat sensationalized case histories in the chapter entitled “The full price,” which put a human face on the subject, but do not add to what Critser says elsewhere and seem more appropriate for a newspaper item than a scholarly work. His style of citation, which places all references in a notes section at the end, is similarly informal and, as a result, hard to follow in relation to the text. In addition, the chronology of events is at times confusing, particularly in the first half of the book, which would have benefited from a time line highlighting the critical events of the last 20 years.

The most concerning aspect of this generally excellent book, however, is Critser’s unfailing criticism of almost every drug mentioned. Rarely does he acknowledge that, despite overzealous and perhaps misleading promotions, many drugs are of tremendous benefit to patients. Nor does he consider potential advantages of the faster FDA approval time line in place today or the strengths of using clinical trials to gather data. Clinicians who routinely deal with both the pharmaceutical industry and patients are well aware of substantial problems with drug promotion and prescribing practices, but this should not completely obscure the benefits of drug development and use in appropriate populations. The challenge we face is not in educating the public that people are being duped, but rather in working together to find better ways to identify and promote beneficial and novel drugs. Nevertheless, for those who wish to take on this challenge and understand its history, Generation Rx is a thought-provoking place to start.