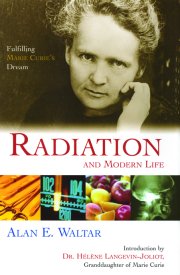 The 20th century has often been associated with the advent of nuclear phenomena: the use of the atomic bomb to finally end World War II, the development of nuclear power for the generation of electricity, and the use of nuclear medicine to help with investigation and treatment of various diseases, including cancer. Perhaps no single scientific theme has evoked such passion, manifested as division into pro- and antinuclear camps. There have been many articles and introductory books that have attempted to present a positive image of nuclear technology. Alan Waltar’s excellently written book Radiation and modern life: fulfilling Marie Curie’s dream has brought this subject to a unique level that many students, members of various groups, and lay people can read and appreciate. Just after reading the first few chapters, one can see the passion that Waltar has for the subject matter.

The book begins with a tribute to Marie Curie by her granddaughter Hélène Langevin-Joliot, who provides a short but very effective historical account of the Curies, from their quest to discover and isolate radium to the premature death of Marie Curie in 1934. Next is a short prologue regarding the inception and inauguration of “The Legacy of Marie Curie: One Hundred Years of Science Innovation” held at Texas A&M University in 2000. This museum-quality exhibition eventually traveled to ten sites in the US. The success of this unique showing led to the determination of Alan Waltar to write this book. In the first chapter, instead of providing the usual detailed introductory descriptions of the chemistry and physics of radioactivity and radiation, he successfully uses short anecdotes about fresh-food preservation, spacecraft power, airport lights, historical dating, efficient engines, and cancer detection, all using various forms of radiation technology, to cleverly pique the interest of the reader. This is masterfully done.

The book then takes on a life if its own. There are virtually no mathematical equations, just very effective explanations and illustrations of basic nuclear properties and the application of radiation in a wide variety of areas in science and technology as well as the major impact it has in the public domain. A very good explanation of the origin of naturally occurring radiation in the environment with a good synopsis of radiation effects at low and high doses is given in the second chapter. The basic concepts of radiation interactions are provided in the third chapter, in which fundamental processes are clarified in uncomplicated terms. Radiation in agriculture, medicine, and nuclear power is well explained in the next three chapters. Each of these areas is treated with detailed examples of the positive benefits of radiation, such as higher crop production, control of insect pests, improved medical diagnostic and therapeutic techniques, and the production of nuclear electricity. Sections on radiation applications in industry, transportation, and space exploration are equally well written and thought out. Topics include process controls, materials composition, cars and trucks, space missions, manned voyages, and the radiation-related health effects of space travel. Additional sections on applied radiation include topics related to terrorism, crime and public safety, arts and sciences, and environmental protection. Excellent descriptions of work in antiterrorism efforts, archaeological investigation activities, soil erosion, and air pollution studies are given. In an additional chapter, the impact of radiation on the economy is also very well described.

Alan Waltar infuses his own personal beliefs about the critical importance of applied radiation technology into a final chapter offering a glimpse into the future. He has done a commendable job in citing many examples in all of the above areas, many of which I am sure the public at large has little understanding of in terms of radiation’s benefits and impact on society. A detailed glossary of nuclear and radiation terms, references for each chapter, and a good index make this a very useful book for the novice as well as those wishing to have a better understanding of radiation and modern life. There is also a unique appendix that covers the uses of specific isotopes in medicine and environmental protection as well as in various other applications. In particular, this is an excellent book to be given to first- and second-year college and university students in liberal arts, sciences, and engineering. This manuscript is a welcome addition to the continuing education of students, nonstudents, and members of various citizen groups, both pro- and antinuclear, who often have been exposed to only a one-sided media view of radiation.