Mucus in chronic airway diseases: sorting out the sticky details

Mucus in chronic airway diseases: sorting out the sticky details

Mucous hypersecretion is a major cause of airway obstruction in asthma, chronic obstructive pulmonary disease, and cystic fibrosis. EGFR ligands and IL-13 are known to stimulate mucous induction, but the detailed mechanisms of epithelial mucous regulation have not been well defined. In this issue of the JCI, Tyner et al. show, in a mouse model of chronic mucous hypersecretion, that ciliated epithelial cell apoptosis is inhibited by EGFR activation, allowing IL-13 to stimulate the differentiation of these cells into goblet cells, which secrete mucus. In defining this coordinated, 2-step process, we can consider the therapeutic effects of blocking mucous production. This begs the question, Is it possible to reduce airway obstruction in chronic lung disease by inhibiting EGFR activation and/or by inhibiting IL-13? 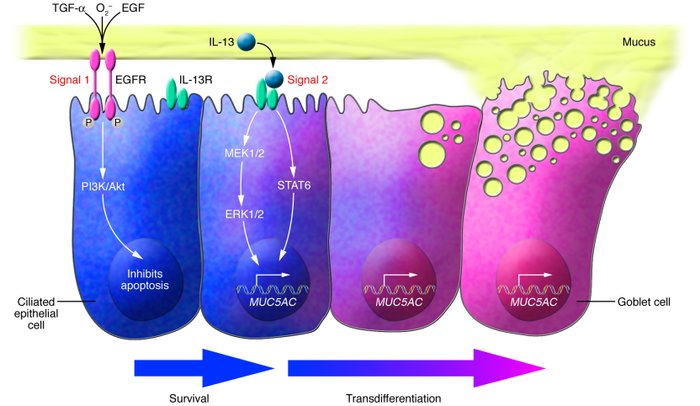 Ciliated cell differentiation into goblet cells requires 2 signals. Tyner et al. (), using a mouse model of Sendai virus infection, propose that the induction of a chronic mucus-producing airway epithelium requires 2 signals. Signal 1 activates the EGFR on ciliated cells and induces EGFR phosphorylation and activation of PI3K/Akt. This pathway leads to inhibition of ciliated cell apoptosis. Ciliated cells that survive can respond to signal 2: IL-13 binding to its receptor. Upon IL-13 receptor (IL-13R) activation and STAT6 signaling, ciliated cells begin to produce mucins (including those encoded by MUC5AC), which are contained within mucous secretions, and lose their ciliated cell surface, taking on features of mucus-producing goblet cells. It also appears that other epithelial cells, such as Clara cells, can differentiate into goblet cells. Thus, the airway epithelium is driven to become a mucus-producing organ, presumably to enhance host defense. In some diseases, such as asthma, this response may be misdirected. Airway tissue from human asthmatics exhibits EGFR activation on ciliated cells, and mucus appears to be induced by IL-13, suggesting that this may also be an important pathway for mucous induction in humans, yet it remains unclear whether other pathways of mucous induction are active in chronic airway diseases.