Evolution in four dimensions: Genetic, epigenetic, behavioral, and symbolic variation in the history of life 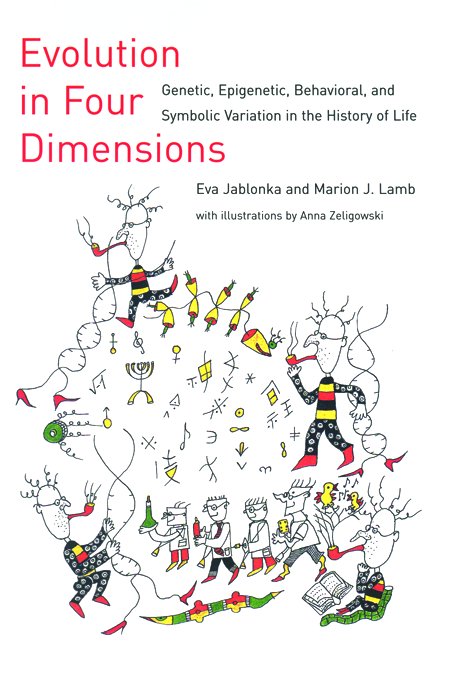 In Evolution in four dimensions: genetic, epigenetic, behavioral, and symbolic variation in the history of life, Eva Jablonka and Marion J. Lamb make a concerted effort to expand on evolutionary theory. The book is one of the best written that I have read in years: clear, succinct, thoroughly signposted, and with ample summaries and reviews of difficult areas. The illustrations by Anna Zeligowski are excellent. The care in writing and the attractive format should not, however, mask the fact that the authors are attempting something revolutionary — a complete rethinking of evolutionary theory.

Lamarckism is alive and well — or is it? Jean-Baptiste Lamarck (1744–1829) is remembered for only a small part of his writings on evolution, what we now call the inheritance of acquired characters. Lamarck believed that giraffes strove to reach higher leaves, resulting in elongated necks over time. Modern Darwinian evolutionary theory does not allow for such transmission of acquired characters. Increasing numbers of observations and intuitions, however, seem to point to something Lamarckian in evolution.

Jablonka and Lamb begin by discussing genetic assimilation, proposed in 1942 by British geneticist and embryologist C.H. Waddington. Waddington treated the pupae of fruit flies with heat shock, causing many of the flies to have abnormal wings lacking cross veins. Waddington bred these flies, repeating the treatments for generations, and eventually found that flies without cross veins emerged from pupae that had not been heat treated. He then argued that an acquired character had been assimilated into the genetic code of the flies, thereby breaking the neo-Darwinian rule that there can be no information transmission from phenotype to genotype. Strict Darwinians argued that Waddington had selected flies with genes for loss of cross veins; the heat shocking was irrelevant. Genetic assimilation was Lamarckism under a new name.

Studies of behavior also brought challenges. Another study done in Britain in the 1940s suggested Lamarckism. Great tits and blue tits “learned” to pick open the foil tops of milk bottles and drink the cream on top. The habit spread throughout the country and passed from generation to generation, so it was, in a loose sense, inherited. Some analysts have since characterized such behavioral transmission as a kind of evolution, where the behavioral trait is termed a meme. In memetics, transmission of such behavior is Lamarckian: it was acquired by one or more birds during their lifetimes, and the meme was then passed down.

As Jablonka and Lamb point out, the concepts of memes and memetics are nonsense, bearing no relation to genes and genetics. Genes are real entities, copied and transmitted through generations. The meme for bottle opening by tits is a chance observation; its bounds are determined by the observer. There is no concrete entity, nothing to be copied and transmitted. Milk bottles with foil tops are rare in Britain now, but some birds still filch the cream. Has the meme survived, or have birds reinvented the behavior from time to time? These are interesting questions, but wrapping the behavior up as a meme is neither here nor there.

Jablonka and Lamb, however, hang onto Waddington’s concept of genetic assimilation and extend it to develop ideas of “behavioral assimilation” and “symbolic assimilation.” The four dimensions in the title of the book refer to evolution as quadripartite: genetic, epigenetic (developmental), behavioral, and symbolic (linguistic). Jablonka and Lamb argue that developmental, behavioral, and linguistic attributes impinge on evolution through assimilation. Their take on the cream-drinking tits is that learned behavior can become innate if it is selectively important. If survival through the winter depends on cream drinking, tits that learn fast would survive best. It would then be the propensity to learn fast that is selected for. Over time, the authors suggest, what is learned is learned faster and faster through the generations until it becomes encoded in the genotype. But how? No one has yet shown that assimilation happens — how can it be distinguished from selection for learning fast or having no cross veins?

This is where the authors’ thesis seems to fall down. Their case studies can be explained by simple natural selection. Behavior is part of the phenotype, as are developmental pathways and some fundamental aspects of the human ability to learn language. So the “four dimensions” become one again.

Other authors have tried to expand on evolution before, yet their efforts have rarely met with enthusiasm for long. The late Steve Gould sought to expand on evolution by adding new hierarchical levels, especially in the realm of macroevolution. I believed him for a while because I, like Gould, am a paleontologist, and it was encouraging to believe that the long time scales offered uniquely by the fossil record allowed us to detect new kinds of evolutionary phenomena. But the critics were right; in theory, species selection could happen, but an example has yet to be convincingly demonstrated. Likewise, I have to conclude that though the experiments are fascinating and the case studies intriguing, none of them indicates that natural selection has to admit epigenetic, behavioral, and symbolic inheritance as separate, let alone quasi-equal, processes. I loved the book, admire the authors intensely, and wish I could agree with their thesis.