Ang II plays a key role in cardiovascular regulation and participates in vascular pathobiology, including inflammation and remodeling. Whether these tissue effects are mediated by direct Ang II actions or indirectly as a result of its influence on hemodynamics is being debated. In vitro data have shown that Ang II induces vascular cellular transcriptional activation and gene expression, but the mechanisms explaining its long-term tissue effects in vivo are relatively unknown. Do the multiple in vivo vascular activities elicited by Ang II (such as inflammation, fibrosis, and vascular cell hypertrophy/proliferation) occur via independent pathways, or do common transcription mechanisms mediate these multiple effects? In this issue, Zhan et al. identify Ets-1 as a critical downstream transcriptional mediator of vascular inflammation and remodeling in vivo; their data suggest that Ets-1 may be a common denominator of a complex process that involves multiple pathways previously considered to be mechanistically independent. Characterization of the critical transcription programs activated by Ang II in vivo and determination of the hierarchy of responses are vital to the understanding of the mechanism of vascular disease and to the development of therapies targeted at inhibiting the common transcription effectors of vascular pathology. 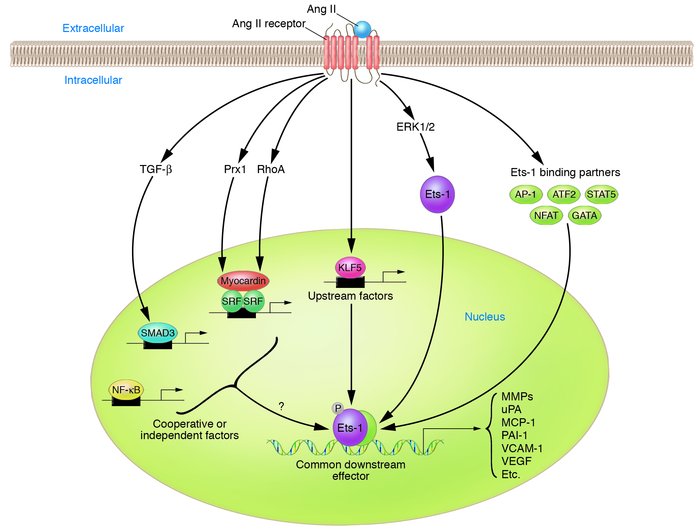 Mechanisms of Ang II_dependent activation of transcriptional programs that lead to changes in vascular function. Ang II activates several groups of transcriptional mechanisms that act in cooperation with Ets-1: (a) Ets-1 binding partners such as activator protein 1 (AP-1), STAT5, nuclear factor of activated T cells (NFAT), GATA, or activating transcription factor 2 (ATF2), which are able to physically bind and regulate Ets-1 activity; (b) KLF5, which is activated in a position upstream of Ets-1; and (c) factors that have been shown to influence vascular function in an Ets-1_independent or _cooperative fashion. The sequence of events that leads to the long-term changes in Ets-1 activation and vascular function in response to Ang II is still undefined. MCP-1, monocyte chemoattractant protein_1; PAI-1, plasminogen activator inhibitor_1; uPA, urokinase type plasminogen activator.