Message in a bottle The making of fetal alcohol syndrome 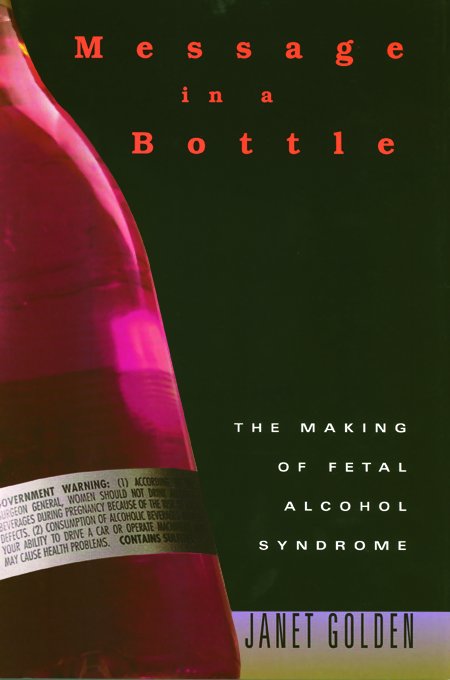 Message in a bottle: the making of fetal alcohol syndrome, by Janet Golden, is the most comprehensive and easily read text on the history, politics, public health debate, legislation, psychosocial and family dynamics, and media discussion concerning fetal alcohol syndrome (FAS). This is a must-read for any professional involved in the study of alcohol abuse and neurodevelopmental outcomes of children, fetal medicine, pediatrics, social work, psychiatry, and other areas of mental health.

The book chronologically delves into the controversial medical debates that have raged for more than 30 years regarding FAS. Golden discusses evidence that the characteristics of FAS were known long before its modern description in the Lancet in 1973 by Jones and Smith (1) based on their observations of mental deficiencies and physical abnormalities in children born to alcoholic mothers in Seattle. This contention is supported by sporadic physician accounts of epilepsy and mental retardation in children prenatally exposed to alcohol during the “gin epidemic” in 18th-century London and the brilliant observations of British physician William Sullivan in 1899, who performed the first scientific study of children of alcoholic mothers, which revealed the teratogenicity of alcohol.

The formation in 1970 of a new NIH Center, the National Institute on Alcohol Abuse and Alcoholism (NIAAA), is well chronicled. Interestingly, the NIAAA did not recognize FAS as a public health hazard in its initial reports. Subsequent to the paper by Jones and Smith (1), frequent sensationalized reports in the news media discussed “alcoholic babies” (2), issues surrounding abortion in alcohol-abusive women (3), and “martinis and motherhood” (4). In addition, almost 2,000 articles on FAS appeared in professional journals between 1973 and 1985. The cost of alcohol abuse was addressed in reports to Congress, and FAS-related national mortality losses were estimated at $24 billion, while productivity losses amounted to an additional $27 billion. Mounting evidence, increased public awareness about alcohol and other drug use during pregnancy, and heated social debate likely contributed to the US surgeon general’s warning in 1988 advising pregnant women “not to drink alcoholic beverages.”

Many local initiatives and state programs devoted to adult education about FAS resulted from continued research, and the Alcohol Beverage Labeling Act came into being in 1989. A link between alcohol abuse and other illicit drug use was also clearly demonstrated. Risk factors for FAS such as very poor socioeconomic circumstances, advanced maternal age, genetic predispositions, and many others have since been described. The weight of evidence and public health messages have gradually held sway, and there is now considerable attention, funding, and research dedicated to the subject. However, it is interesting that, to this day, many clinicians remain skeptical of the teratogenic effects of alcohol.

Perhaps the most compelling aspect of Message in a bottle is Golden’s discussions of the litigation against mothers who abuse alcohol (and other drugs) during pregnancy and other legal and moral issues. Rehabilitation, incarceration, and feminist and civil rights activities have often been the subject of public forums and reports in diverse media. Other issues concerning the culpability of FAS-affected persons in serious crimes such as murder, arson, and rape are also addressed. Golden recounts the tortuous story of Robert Alton Harris, a convicted double murderer whose failed attempts to have his death sentence overturned, based in part on the fact that he suffered from FAS, galvanized public opinion.

Golden appropriately ends with the following statement: “At the heart of these paradoxes lies our profound cultural ambivalence about women’s obligations as mothers, about the status of the fetus, about personal responsibility, and about alcoholism.” Nevertheless, equipoise among the societal, biological, and ethical considerations relating to FAS has now been largely achieved and is well described in this book.