The discovery of the antiinflammatory effect of insulin and the proinflammatory effect of glucose has not only provided novel insight into the mechanisms underlying several disease states but has also provided a rationale for the treatment of hyperglycemia in several acute clinical conditions. Van den Berghe et al. previously showed the benefits of intensive glycemic control with insulin in patients admitted to intensive care units. In this issue of the JCI, the same group of investigators now demonstrates that infusion of insulin to restore euglycemia in these patients results in a marked reduction in inflammatory indices such as adhesion molecules, hepatic iNOS, and plasma NO metabolites. The reduction in the mediators of inflammation may thus be responsible for the impressive improvement in clinical outcomes following insulin therapy, and the results suggest a new paradigm in which glucose and insulin are related not only through their metabolic actions but also through their opposite effects on inflammatory mechanisms. 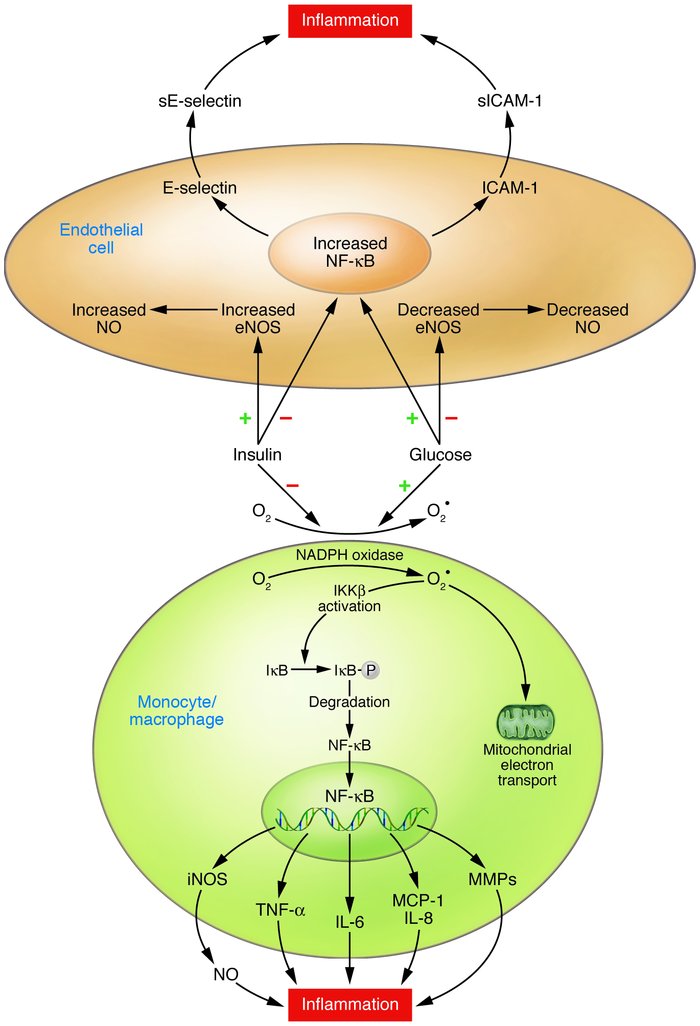 The antiinflammatory effect of insulin and the proinflammatory effect of glucose. Insulin suppresses ROS and O2– generation and NADPH oxidase expression, while glucose stimulates both. Within the macrophage, O2– activates inhibitor of NF-κB kinase β (IKKβ) to enhance phosphorylation of IκB (α and β) such that it undergoes proteasomal degradation, releasing NF-κB to translocate into the nucleus. NF-κB stimulates the transcription of genes encoding proinflammatory proteins including TNF-α, IL-6, monocyte chemoattractant protein 1 (MCP-1), and MMPs. Within the endothelial cell, insulin also induces eNOS expression in endothelial cells, which leads to controlled NO release and vasodilation, while glucose has the opposite effect. Glucose induces the expression of adhesion molecules ICAM-1 and E-selectin, while insulin suppresses their expression in the endothelial cell. sE-selectin, soluble E-selectin; sICAM-1, soluble ICAM-1