Splendid solution Jonas Salk and the conquest of polio 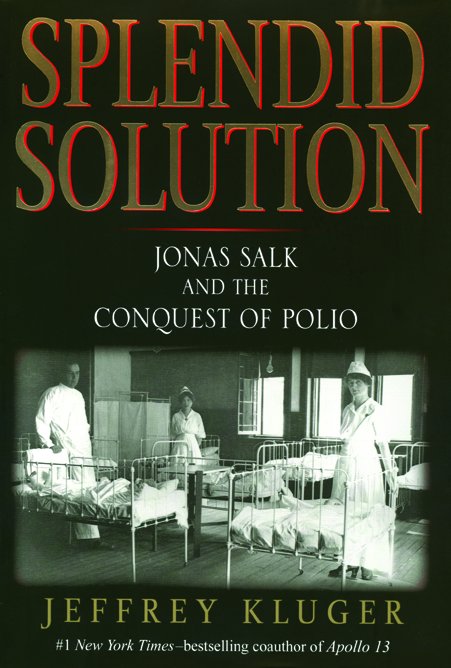 Few medical histories are as compelling as the story of the conquest of poliomyelitis. This viral disease suddenly emerged in epidemic form at the turn of the 20th century, causing paralysis and death, mainly in children. With unrelenting predictability, the disease began each year in the spring, and the number of cases inevitably increased with the onset of hot weather. Poliomyelitis was truly a terror because no one quite understood how it was transmitted or how it could be prevented and its victims were seemingly chosen at random. Beginning in 1906, when the virus that causes poliomyelitis — poliovirus — was identified, many scientists worked to defeat the disease. The story of its conquest is filled with trial and many errors, a “scientific hegira” (1), in the words of polio researcher Dorothy Horstmann, that has been well documented in many scientific publications and books.

This year marks the 50th anniversary of the hugely successful field trial of the inactivated poliovirus vaccine developed by Jonas Salk. Thomas Francis announced the results of this landmark field trial (in which 1,800,000 children participated) at the University of Michigan on April 12, 1955. In Splendid solution: Jonas Salk and the conquest of polio, Jeffrey Kluger tells the story of how Jonas Salk became a hero.

The terror once caused by polio, now mostly forgotten, is vividly portrayed at the onset of Splendid solution, which begins in New York City in 1916. The sources of hysteria are all too evident: nurses and policemen surreptitiously roaming the streets in search of lame children; black cars patrolling neighborhoods, bringing doctors who search homes for paralyzed children (the mothers “did not surrender their sick babies easily, often cursing the city physicians as soon as they arrived”). Quarantining children in city hospitals in an attempt to stem the disease was a disruptive practice at best and had no benefit. Many years later, it became clear that paralytic cases represent a small fraction of all infected individuals; for each paralytic case, there were 99 individuals infected with the virus but displaying no symptoms of the disease.

In 1916, Jonas Salk was 2 years old. He was raised in New York City but, fortunately, did not contract polio, although his parents were very much aware of the disease: Salk’s mother reminded his father to leave his shoes outside each day as he returned home from work. While attending City College of New York, Salk decided to become a doctor and enrolled at New York University School of Medicine. But he did not want to practice medicine — he wanted to go into research. In medical school, he became acquainted with Thomas Francis, whom he eventually followed to the University of Michigan. There, Francis and Salk developed an influenza vaccine for the military. Five years later, Salk moved to the University of Pittsburgh, where he began his work on a poliovirus vaccine.

Interwoven with the history of Salk’s early years is the story of Franklin Roosevelt, the US president who played an important role in the conquest of polio. Roosevelt was perhaps the most famous victim of polio; his desire to eliminate the disease led to the establishment of the National Foundation for Infantile Paralysis, which provided financial support for Salk’s research. The interactions between Roosevelt and his law partner Basil O’Connor, who directed the foundation after Roosevelt’s death, are vividly and colorfully portrayed.

The book is written as a narrative with a significant amount of dialogue among the main characters. The conversational style lends immediacy to the writing; we feel as if we are in Salk’s laboratory, listening to him discuss results with research personnel, or at one of the many conferences on poliomyelitis that were so charged with tension and debate. Kluger is clearly adept at telling a story; the book is always engaging as it rolls toward the clinical trial of 1954. He builds tension, starting with the hysteria in New York City, then continuing with the disastrous vaccine trials of the 1930s, Salk’s dogged pursuit of an inactivated vaccine, his legendary clashes with Albert Sabin over whether to use a killed or live virus vaccine, and his loss of anonymity once his vaccine research was revealed to the general public.

Splendid solution assumes little scientific background — as a writer for Time magazine, Kluger is adept at communicating to a general audience. While the style is entertaining, the book is unsatisfying because the main characters are portrayed in a superficial manner. Despite the dialogue, we never get to know Salk very well; his character is established by his actions, not by his thoughts. What was Salk’s reaction when, in 1955, vaccine produced by Cutter Laboratories caused 204 cases of polio? We never learn that Salk was “a keen young man who knew his business and was independent in forwarding his own ideas — one who could outline a program of experimental work and carry it through in spite of formidable difficulties . . . a slight man who radiated a sort of restless eagerness and energy” (2).

The science in Splendid solution also needs improvement. While Kluger explains the principles of vaccination reasonably well, there are many errors that sully the text. He ascribes to Sabin the theory that poliovirus entered the nose and spread to the brain from the olfactory mucosa when in fact this harebrained idea was the brainchild of Simon Flexner; it was Sabin who proved him wrong. Kluger does not quite understand how adjuvants work (“the more viscous mix would not be able to break down so easily in the blood”) or realize that poliovirus does not multiply in the stomach. The caption to the photograph on page 239 showing Salk holding a rack of tubes is incorrect: Kluger writes that Salk “posed with a rack of test tubes similar to the ones in which he first mixed live virus with his experimental vaccine. The vaccine stopped the virus in its tracks.” Rather, Salk mixed serum from humans immunized with his experimental vaccine in order to determine whether antibodies that would block poliovirus infection of cells were present. Perhaps Kluger should have studied John Paul’s excellent A history of poliomyelitis (2). Although Kluger’s book is written for a general reader, the use of colloquial terms such as “bugs” to describe viruses is neither correct nor useful; such terms are not appropriate for an adult audience. To understand science, one must use the words of science.

It was particularly revealing to learn how the National Foundation for Infantile Paralysis used an iron hand in directing the research of its grantees. For example, after hearing of John Ender’s results on propagating poliovirus in cultured human cells, Salk wanted to use this method to produce an inactivated vaccine. He wrote to the National Foundation to outline his ideas, and he was ordered not to pursue this work but to continue his virus-typing studies. As Kluger writes, “He would not be permitted to try killed-virus studies, though he could work with live viruses.” This draconian control is contrary to progress; the best science emerges when good scientists are let loose. The NIH, which subscribed to the latter view for years, may now be emulating the foundation in its attempts to direct research through the NIH Roadmap.

Despite the deficiencies of Splendid solution, the remarkable story of the conquest of polio prevails. Salk’s inactivated vaccine reduced the incidence of poliomyelitis in the US from 57,879 cases in 1952 to 1,312 cases in 1961. As a result, Salk became a cultural hero, an unusual role for a scientist. In a cruel twist, Salk’s vaccine was pushed aside in 1962, when the US switched to the live vaccines developed by Sabin. Salk spent many years and much energy defending and promoting his vaccine, a chapter in the history of poliomyelitis that Kluger omits. Sadly, Salk did not live to witness the change in US immunization policy in 2000, when the live poliovirus vaccine was replaced with Salk’s splendid solution.